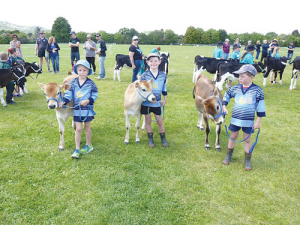 And attention may be needed to how some kids may react to seeing stock carted off for slaughter, he says. The Ministry for Primary Industries says it is sticking by its recommendation that schools and clubs don’t hold calf days this spring.

“It’s a pretty low risk, but we are in a critical phase for tracking down and eradicating Mycoplasma bovis and it’s helpful to not mix animals at events like calf days if possible.”

But Pyle asks why doesn’t MPI prepare now to use these days to educate rural youngsters and their families and friends about biosecurity?

“While the guidelines are a good start, there should be education on the disease: why animals shouldn’t make contact, what’s the point of disinfecting boots, etc and what are appropriate disinfectants and methods and so on,” he says.

“Since calves from farms under restrictions will be excluded, everyone is going to know who and where these are, and this could be good or bad.

“Another aspect that could be covered is our response to culling of animals. Some of the kids will have heard of, or even seen, a neighbour’s stock being carted off for slaughter.

“They need to be given help to deal with the gut-level responses of their own, family members’ and friends’, and in particular their response to others in the community who may have had their stock culled or be facing that prospect.”

As an environmental microbiologist, Pyle strongly disagrees with one of the guidelines given out – that if calf days go ahead participants bring milk but do not share it.

“No natural milk should be brought to calf days as feed; it should all be milk replacer to avoid any risk of cross-contamination,” says Pyle.

“Calves often salivate during and after feeding and may suckle the navels of other animals. These are instinctive traits and would be difficult to prevent especially for a youngster in control of a rambunctious calf.

“Maybe in future, the parallels between M. bovis and foot and mouth control should be made,” Pyle suggests.“We are now (again) in practice mode for that eventuality, but to raise it with school-age children may be too scary at the moment.”

Meanwhile MPI, DairyNZ and Beef + Lamb NZ are all still advising against calf days this year.

But MPI recommends if schools and clubs do go ahead with events, they should talk with communities and take all sensible precautions.

They should refer to the fact sheet on the DairyNZ website for further advice: www.dairynz.co.nz/media/5789749/m-bovis-calf-club-days.pdf