Bull burps could hold the answer 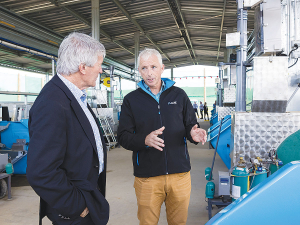 Breeding low methane emitting cows is a step closer after promising results from a pilot trial.

Artificial breeding companies LIC and CRV joined forces for the Waikato trial that measured feed intake and methane emissions – in the form of burps – from 20 young bulls destined to father the next generation of New Zealand’s dairy cows.

Results show a possible link between a bulls’ genetics and the amount of methane they produce.

“Methane production primarily relates to how much an animal eats. We’ve accounted for this and we’re still seeing variation which suggests genetics plays a role in a dairy bull’s methane emissions – now we need more data to prove it.”

The research will now progress to a much larger study where operations have scaled up to collect measurements from 300 young bulls, the full intake from LIC and CRV’s Sire Proving Scheme.

Agriculture Minister Damien O’Connor attended the launch of the project at LIC’s farm outside of Hamilton earlier this month.

O’Connor hailed the cooperation between rivals LIC and CRV.

“Each one of the cows we have in New Zealand now produces a whole lot more for the same inputs that we put in maybe 20 or 30 years ago. That kind of progressive development that we’ve seen in production, we want to now see in methane reduction and I’m sure we can do that. We are innovative, we’re creative and we’re cooperative.” Although methane emissions have been shown to be heritable, Spelman says LIC and CRV will carry out additional research to validate their findings.

“We will be methane testing daughters from the bulls that are identified to be high or low methane emitters to check their emissions are representative of their father’s.

“It’s a long term project but it has the potential to deliver real benefits to farmers in the future by providing another tool to reduce their farm emissions,” Spelman said.

CRV R&D manager Phil Beatson says more than two and a half years of planning together with his colleagues at LIC has gone into setting up a robust structure for the research project.

“Together, we have done a significant amount of work to set up this trial, including using insights from overseas projects measuring feed intake and methane emissions. We believe we are using the best approach for what is enormously complicated work.

“CRV and LIC recognise that environmental issues have become increasingly important to New Zealand agriculture. Our collaboration, with support from MPI, AgResearch and NZAGRC, demonstrates our commitment to keep finding genetic solutions that can help farmers future-proof their business.”

Harry Clark, director of the New Zealand Agricultural Greenhouse Gas Research Centre, is delighted with the outcomes of the pilot trial.

“We have been highly successful in New Zealand in breeding low-emitting sheep and this preliminary work with the bulls is a positive sign that we should be able to achieve the same for the dairy sector,” he said. Spelman says while breeding for more climate friendly cows is the focus, it’s still a balancing act with other genetic traits.

“It’s really important that we understand the genetic relationships between methane and traits like milk production and fertility.

“We don’t want to find we are selecting against methane and inadvertently breeding cows that are less fertile.”

The welfare of the bulls taking part in the trial is being constantly monitored by LIC, with oversight from the Ruakura Ethics Committee which has approved the project. The bulls have the freedom to move around in their pens – eat, drink and sleep when they wish.

The bulls involved in the trial are housed in a barn so their feed intake can be measured.

Bulls help themselves to feed throughout the day. They eat Lucerne hay cubes via feed bins which measures how much each bull eats.

They're enticed to visit the machine as they get a small feed of pellets which keeps them in the machine for three to five minutes - enough time to get a methane measurement (ruminant animals burp every 1-2 minutes).

Bulls are under 24/7 video surveillance so scientists can monitor them remotely. It also allows scientists the ability to go back and review footage if they see any odd pieces of data from the machines that need further explanation.

A novel scientific approach which has identified a number of genetic variants impacting the health and wellbeing of New Zealand dairy cows has been published in the prestigious scientific journal, Nature Genetics.

In response to growing demand from dairy farmers, CRV says is has increased its offering of polled sires from 11 to 15.