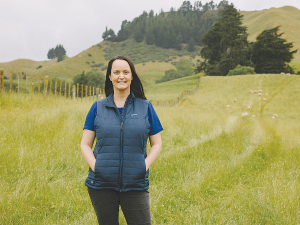 Emma Higgins, Rabobank says the next season will be a challenging one.

That's the message to dairy farmers from Rabobank's senior agricultural analyst Emma Higgins who says there are more risks now than last season and these are building, especially in our main market - China.

She says, while Rabobank is forecasting a $9 milk price, there is still a great deal of uncertainty about what might happen in the coming months.

The focus is on when the hard lockdowns in Shanghai might lift. The Ministry of Foreign Affairs is saying it could be mid to late June before any sense of normality returns to the city, which is a major port through which many of NZ's exports go through.

Higgins says questions remain about how and when that might happen in the coming weeks.

"This is a key watching point and obviously there are still conversations going around the risk of secondary sanctions being applied to China should they enter into the geopolitical tussle between the US and Russia. If that were to happen, there is a risk that our major market could evaporate overnight, which would have dire consequences for NZ.

"We are not there yet, bus as I say, the risks are building and that is only one market, let along things like rampant inflation and other recessionary risks as well," she says.

On top of the Covid lockdowns in Shanghai, Higgins says the Chinese economy is slowing and economists the world over are slashing forecasts for global growth.

She says there are other factors taking place within China that are of concern to our dairy industry - in particular the phenomenal growth of their domestic dairy industry.

Higgins says, in the last two years, milk production in China has grown by 15% and a staggering 8% in the first quarter of this year. She says the expansion of the Chinese dairy herd has been a target for their government and that has implications for NZ.

"The consumption data in China is quite bumpy but we don't think consumption has grown at quite the same rate as production yet. At the same time, their imports have been incredibly strong. NZ has obviously been a major player in that and so when you build that picture up... we do think that the China market is well stocked and we do expect to see some weakness appearing across the course of this year, in terms of their import demand.

"In the first quarter of this year our shipments to China actually slowed down by 20% year on year for quarter one."

Given all this information, one could be forgiven for thinking that China is moving towards what happened in the then EEC in the 1980s - over supply called 'milk lakes'. Higgins' view is that China is "well stocked" with dairy products and there are other factors which have contributed to this during the pandemic, such the broken supply chains.

"Also, the fact that companies may have changed their buying strategies and perhaps moving from 'just in time' to 'just in case' which could have contributed to some of the import growth," she says.

Higgins says adding to the woes is the Ukraine conflict which no one could have predicted a year ago. She says talking through some of these scenarios is "uncomfortable" and not nice but the risks need to be put out there.

Softer demand manifested in a clear downward trend for global dairy commodity prices across May 2022.

Get ready for a bumpy ride

Rabobank is warning the country's dairy farmers to prepare for a very bumpy economic ride in the coming season.