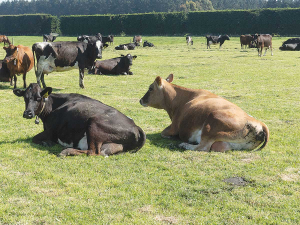 “The average Canterbury dairy farmer at the moment is just treading water: that would be the polite way of putting it,” he said.

“And that’s the average. If the average is just treading water there’s a number of dairy farmers probably going backward at the moment.”

He presented figures at the recent LUDF Autumn Focus Day showing how the average Canterbury dairy farmer would not be increasing equity (capital gains aside) over the next 10 years.

It’s a real concern….chasing big yields may be compromising their profitability and viability, he said.

Many should lower their expectations of what their cows can do, spend less on supplements, and simplify businesses while introducing simpler systems for staff to follow.

Savage presented a paper to the Focus Day in conjunction with North Canterbury dairy farmers James and Belinda McCone, showing how they tackled change.

Savage said it was not necessarily saying what everyone should do, but was a case study of what could be done.

“Here’s a process which a farmer went through to analyse his farm.”

The LUDF focus day was presented with four different Overseer scenarios – the current regime, an early-cull system with no Autumn supplement, delayed culling with high supplement, and a high stocking rate system.

The current system gave N losses of 34kg/ha and the others were progressively worse up to 45kg/ha for the high stocking scenario.

(For comparison, LUDF’s 2009 – 2013 baseline was 70kg/ha, before the farm was reprioritised around reducing its environmental footprint.)

Savage said the key highlight of the Overseer scenarios was that delaying culling and using more supplements would give only marginally improved profitability at best but actually had “quite an environmental footprint”.

The lesson for farmers was not to chase milk production in a profitable year, but find out what their best farm system is, and it would be the best both in a high payout year as well as a low-payout year.

Meanwhile, LUDF has gone back to basics on mating after an unsatisfactory all-AB strategy last season left them with too many empty heifers, despite using SIDRs on the heifers in an attempt at maximising the AB effectiveness.

Savage said they used bulls again for the heifers, no SIDRs, and 100% AB in the main herd.

Savage said they had no trouble getting the first lot of cows in calf but the tail end was struggling, with some cows having to be mated four times.

In the wider industry, some farmers were getting exemplary results with low empty rates but it was hard to replicate.

“It’s something the industry continues to grapple with,” said Savage.

A quarter-century of weather data from one Central Otago farm is being analysed to see if it could lead to better farm planning for temperature and moisture variations across different altitudes and aspects.