50 years of taking country to town 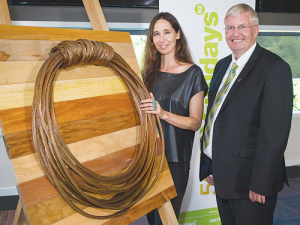 National Fieldays will this year celebrate 50 years of showing farming’s best to country and town.

Launched in 1969 at Te Rapa Racecourse, the Town and Country Fair was aimed at bringing together rural and urban people to celebrate New Zealand farming’s industry and lifestyle and the contribution it makes to the economy.

It moved to Mystery Creek in 1971 and is now a fixture on many calendars, with several hundred thousand people visiting each June.

Celebrations began this month with an event at Te Rapa Racecourse: local politicians and district mayors, agricultural leaders, past and present presidents and members of the NZ National Fieldays Society, Waikato Racing Club members and other VIP guests relived the early days with speeches and anecdotes, and the unveiling of an anniversary sculpture. Many who attended helped at the inaugural Fieldays in 1969, including John Kneebone, who sparked during a trip to the UK as a Nuffield scholar.

National Fieldays chief executive Peter Nation thanked the Waikato Racing Club for its collaboration and sacrifices in the early days.

“The organisers at that first event in 1969 thought they’d have a couple of thousand people turn up. But on the day more than 10,000, with cars parked all the way up the Te Rapa straight, which was farmland back then,” Nation said.

“I can only imagine the state of the racecourse after the first day with all those people trampling across it. We’re very grateful for that early relationship with the racing club, a relationship we’re still proud to have.”

He thanked the original six farmers of the Fieldays Society, whose tenacity and perseverance he said paved the way for Fieldays to become the premiere agricultural showcase it is today.

“Those first six farmers approached ANZ in North Hamilton for a loan of $62,500 -- $430,000 in today’s money -- so they could move Fieldays to Mystery Creek, which then a run-down dairy farm.

“The story goes that when the society went into the bank they were asked what security they had for the loan, and one of the farmers threw a roll of copper wire on the bank manager’s desk and said, ‘this is the only asset we own’.”

The anniversary sculpture unveiled at the launch, entitled Origin ‘68, incorporates the same copper wire that was thrown onto the bank manager’s desk decades ago; it is mounted on reclaimed native timber that once lined the Fieldays Society’s original boardroom.

“The copper in the sculpture is very important,” says Nation. “It’s a valued commodity, and it signifies communication and the transfer of information, and relationships and collaboration. It also speaks to that No.8 wire mentality, that Kiwi way of just getting it done.

“It’s important the sculpture be for everyone to enjoy, because Fieldays isn’t just an event for farmers and the agricultural industry – it’s a chance for everyone to get together and celebrate agriculture as a fantastic, integral part of NZ’s lifestyle and economy.”

Auckland sculptor and jewellery designer Cherise Thomson said it was “an honour to be chosen” to create the sculpture.

Thomson won second place in the Fieldays No.8 Wire National Art Awards in 2016 with her wire sculpture Korowai and was a finalist again in 2017.  She says the 12 copper loops framed with native timber is a tribute to the seasonal life of farming and the dedication of Fieldays’ volunteers and staff.