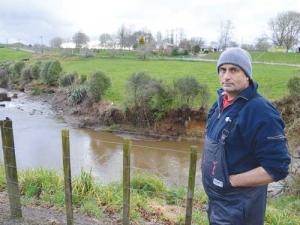 The low payout is not holding back flood-ravaged farmers in parts of Taranaki from replanting riparian areas or fencing waterways.

Two months on from one of the region’s worst storms in decades most farmers have spent thousands of dollars to repair infrastructure and clear waterways.

The North Island flooding in June is estimated by the Government to have cost the economy $270 million. Most dairy farms in the affected areas lost land, fences and riparian planting from land slips from streambank erosion and overflowing rivers.

Brendan Attrill, who farms at Toko, 50km southeast of New Plymouth, has spent $25,000 on repair works since the floods.

A Fonterra supplier, Attrill milks 350 cows on a 115ha (eff) property with his wife Susan.

He says they could have done without spending the money on repairs in a challenging year. However, he says the low payout should not mean less focus on environment.

“Susan and I could do without the $25,000 cost, like everyone else right now,” he told Dairy News.

“But, if we did nothing all those plants would have died and we would have been left with completely useless infrastructure down the western boundary of the farm.”

Attrill’s farm suffered 10 slips; his farm lost about 2000 riparian plants and 2km of fencing. He has since repaired the fence, re-staked 600 plants and planted 1000 new ones.

Two rivers -- Toko and Patea -- meet on Attrill’s farm. Though he was prepared for the June floods, moving stock to higher ground, the damage took him by surprise.

“We knew we were in trouble because our friends in eastern Taranaki were reporting high rainfall. We knew all that rain from eastern Taranaki and that catchment would work its way down to our catchment; so we knew it was coming and shifted all stock to a higher standoff pad.

“Saturday night looked alright and we thought we would get away with it, but late on Saturday night the river levels rose like we’ve never seen before.”

Attrill says it was devastating to see the damage; it took the farm about a month to get back to normal operation.

But he says restoring riparian plants and fences was a priority.

“We have got the environmental and sustainability back in play,” he says.

“We are in dairy farming for the long haul; as third generation farmers on this property we believe it is our duty to protect the environment despite the financial costs.”

He says flooded farmers have had help from bankers, Taranaki Regional Council and others.

The council has set aside $395,000 to help with riparian planting, preventing soil erosion; it will be supplying grass seed and helping with environmental fencing repairs.

Council director of operations Stephen Hall says it was tough to see some of the good work by farmers destroyed in a few days by June’s extreme weather.

“Some of it was years of effort, he told Dairy News. “We want to help where we can, so our storm recovery package is available to all farmers with plans, or those who want to get a plan, and work with the council to help them recover from the storm damage.”

Of the 2500 farm riparian management plans in Taranaki, 1760 are for dairy farms.

Taranaki has 14,000km of streams and waterways on farms; 83% of the waterways are protected by fencing and 68% are planted.

“By the end of this decade all farmers will have plans and 100% will be riparian planted,” Hall says.

The riparian management plan is voluntary; no regulations or subsidies are involved.

“Farmers do everything off their own backs,” Hall says. “The council assists by providing plants at cost price.”

Hall says despite the low payout, dairy farmers remain committed to the programme.

“The pace may have slowed slightly; instead of buying 1000 plants this season they are buying 500 plants. We understand it’s a long game and farmers might take an extra year or two to complete planting. We are flexible and fully support them.”