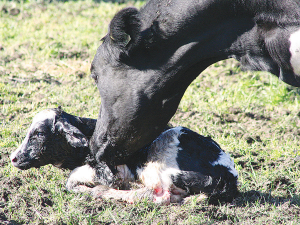 Selenium is an essential trace element required in fertility.

Selenium is an essential trace element for ruminants and required for growth, fertility and the prevention of mastitis and calf scours. However, selenium deficiency is prevalent in soils NZ-wide.

It’s important to understand the relevance and impact of selenium deficiency.

Why is selenium important?

Specific enzymes (selenoproteins) require the incorporation of selenium to ensure their activity in the animal. These enzymes reduce the presence of oxide radicals (produced during normal metabolic activity and elevated during stressful periods) that cause cell damage and subsequent malfunction of tissues. Protection against these harmful byproducts is especially important in high energy-demanding cells such as heart, muscle and mammary gland cells.

Unfortunately, there is often a selenium deficiency in animals due to limited uptake from the diet. These deficiencies can be large in ruminants grazing on pastures grown on selenium-deficient soils, such as here in NZ. Resulting challenges may include suboptimal milk production and fertility, mastitis and premature, weak calves.

In places with severe selenium deficiency, calves have poor growth rates and difficulties standing, and sudden deaths can occur. To prevent this, it is important to provide additional selenium via the diet and assess regularly the selenium status of the herd by analysing blood and milk.

Selenium can be added to the diet in either inorganic or organic forms. The advantage of using organic selenium over inorganic sources (e.g. sodium selenite or selenate) is its ability to be incorporated directly into animal proteins. This incorporated selenium (in the form of LSelenomethionine) acts as a storage depot of selenium inside the animal.

LSelenomethionine is the only selenium compound that can be directly, without conversion, built into animal structural proteins (i.e. muscle and liver). This ensures optimal selenium supply even during stressful periods (e.g. calving, lactation, heat) when selenium intake is required most by the animal.

L-Selenomethionine has traditionally been supplied to a cow’s diet via addition of selenised yeast. However, the yeast approach is limited. Normally, around 63% of the total selenium in a selenised yeast is present as L-Selenomethionine but there is a huge variation between products and batches (it can be as low as 18%). The remaining selenium absorbed by the yeast cells is present in forms that are no more active than much cheaper inorganic selenium.

The introduction of Excential Selenium 4000 into the market will provide a better option to optimally supply animals with L-Selenomethionine.

Stressful periods, for example, transition, birth and weaning, during a dairy cow’s life are plentiful and they are always correlated with an increased oxidative stress.

The period three weeks prior to calving and three weeks post calving presents a big challenge to cows as they transition from late gestation to early lactation. The increased metabolic activity and energy demand that marks this period is linked to a high increase in oxidative stress. To combat this stress the animal needs high amounts of selenium.

This leads to effective reduction in oxidative stress.

Storable selenium (L-Selenomethionine) can have a big positive impact during stressful periods.

Positive effects for organic selenium are also seen on the immunity (e.g. neutrophils).

This will be beneficial in improving the mammary gland health and lowering the somatic cell count.