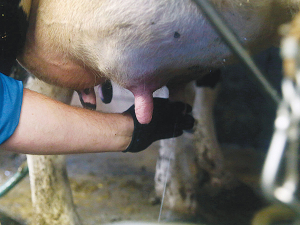 How does mastitis spread? Mud and muck gets onto teats and causes mastitis, often in spring and is generally caused by streptococcus bacteria.

There can also be cow-to-cow spread; bacteria in the milk of an infected cow will contaminate the cups for the next five cows milked with that cluster. This is commonly caused by staphylococcus bacteria.

There are several ways you can treatment:

1. Clean the teat end, before taking a milk sample or treating the cow.

2. Collect initial milk sample, then either submit to lab for culturing bacteria, or freeze for later.

3. Treat with antibiotics as per veterinary authorisation.

5. If the cow is very unwell, seek veterinary advice.