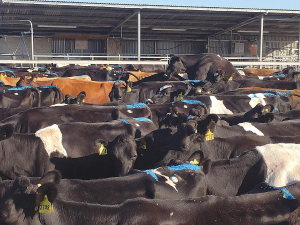 One of the biggest headaches faced by NZ farmers is reproductive failure where in a herd six–week in calf rates fall and empty rates climb.

This translates to a major hit to the businesses bottom line due to lower production and more involuntary culling.

While many of the contributing factors to poor reproductive performance are obvious (Poor BCS, Endometritis, Metabolic disease, lameness & Bull management) one factor that is not often thought of is heat stress.

The majority of spring calving herds in the North Island are susceptible to heat stress as they mate cows from mid-October to late December. Towards the latter part of this period it is not uncommon to see cows grouped around water troughs and under any available shade with drooping ears, tongues protruding and drooling excessively.

These clinical signs represent an animal struggling to cope with heat which results in immediate depression of feed intake, decreasing production and less obvious reproductive failure. This is one of the reasons why cows seem harder to get in calf towards the end of the mating period.

In a scientific article published earlier this year by authors Wolfenson and Roth the depressive effect of summer heat on average conception rate of lactating cows artificially inseminated was reported to be 27.7% during summer months compared with 42.6% during the cooler winter months.

This effect was most noticeable in hotter years where a further 5% depression in conception rates was observed. This is a very significant effect!

While the actual mechanisms for this depression in conception rates are complex, the effect of heat on reproduction is via multiple actions involving interference with reproductive hormone secretion, the health of ovarian function pre – ovulation, the cows ability to support early pregnancy and the viability of the embryo (which is most sensitive to excessive heat up to 8 days post conception). Further, there is a larger negative effect on the breeds of cattle common to the NZ dairy industry which originated from cooler climates.

So, what are the practical implications for managing the ill effects of heat stress on reproduction. The most obvious answer is to reduce exposure of breeding cows to extreme heat by avoiding mating cows through hotter times of the year. This further incentivises the goal of attempting to maximise pregnancy rates through the early mating period. The more cows in calf prior to the heat arriving the better! The second and (in some cases) less practical approach is to attempt to better manage heat stress in cows through the hotter months by ensuring cows are provided with plenty of cool water, shaded areas, sprinklers on stand-off areas and fans during milking.

If you are reading this and concerned your cows may be struggling to conceive speak to your farm advisor or Veterinarian about possible strategies to reduce the immediate and future effect of heat stress on reproduction.