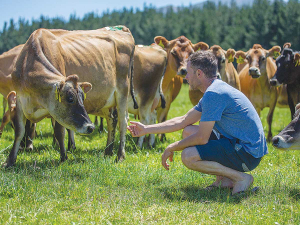 John Totty says the transition to Jerseys has been an easy decision.

The Staveley Jerseys stud was founded by John’s grandfather, a passionate Jersey breeder, in the early 1960s. Back then the farm milked 150 cows and ran dairy replacements, sheep, beef, and crop.

When John’s parents took over the business the farm was expanded, purchasing a neighbouring property in 1995 which was converted the following year. A Friesian herd was purchased and for 20 years the property supported a 750-cow herd while continuing to run young stock.

Seven years ago, the farm was 50:50 Jersey and Friesian genetics, today the farm is about 70% Jersey genetics and breeding back towards a full Jersey herd.

John says the transition to Jerseys has been an easy decision.

“We are aiming to get to the point where we produce a kilogram of milksolids for every kilogram of liveweight, while keeping farm working expenses under $4.”

“Seven years ago, with a 50% Friesian herd, we were doing 265,000kgMS, now we are achieving 385,000kgMS with a predominantly Jersey herd, at a lower cost. As a bonus, our Fonterra cheque is always ahead of the company average too.”

The flexibility of Jersey’s was reinforced in John’s first year on the farm when a severe drought forced the herd on to once-a-day (OAD) in December.

“The Jerseys powered through but the Friesians sulked and had to go back on twice a day when the drought broke to get their appetites up.

“Jersey’s will hold production through tough times, and recover a lot quicker in Autumn.”

Up until this season the farm had previously split the herds by breed but this year for the first time the herds have been split by BW.

“Mixed herds didn’t work well with big Friesians. Over time we have achieved more consistency in size through the use of jersey artificial breeding (AB) sires and the sale or culling of higher Friesian content animals, and that has enabled us to split herds by BW instead.

“It has really simplified the operation. The top herd is mated to AB for six weeks using Jersey sires followed by four weeks of Jersey bulls and two weeks of short gestation dairy. Whereas the jersey bulls go straight out with the lower BW herd meaning we are only doing AB through one shed.”

John says the flexibility of the Jersey breed also includes the adaptability to variable milking intervals.

“One of our business goals was to move to a 10 in 7 system – that is 10 milkings in 7 days, a variation of 16-hour milkings but with more convenient milking times for staff. This season is our first employing the 10 in 7 system full season.”

“Jerseys have around a 30-hour holding capacity versus a Friesian at around 20-hours, and this is a big advantage when using variable milking intervals.”

In John’s business, the Jersey advantage extends beyond just efficiency and profitability to management traits like calving ease, animal health, and mastitis.

“Jersey’s have tremendous calving ease – we averaged one assisted calving per week this season. We also have very few down cows, and often they are our older F16 girls that are more prone to metabolic issues.

“This season we had just four cases of clinical mastitis in August and thirty cases total over calving. Our somatic cell count is currently sitting around 100,000.

“All of these factors contribute to reduced animal health costs, reduced labour costs, and more manageable hours for staff.”

Jersey’s have also been key to cash flow in the business, with a ready market in the South Island for surplus stock.

“There is a good market for Jersey bulls with everyone using them over their heifers due to the superior calving ease. We also sell our young empty cows as carryovers, as well as our lower production worth (PW) animals, bringing through higher breeding worth (BW) replacements that better meet our herd goals.

“We’ve even had instances where people have come to look at our surplus Friesian or crossbred stock and ended up buying our surplus Jerseys because of their breeding worth, type and proven efficiency.”

The Jersey cow is also gaining a growing reputation for its lower environmental footprint. In the South Island where wintering practices have come under the spotlight, a lighter cow could be beneficial.

“In our business the environmental picture is becoming more and more important, particularly around pugging and winter grazing. We always try to have an eye to the future and a lighter cow that has less impact on the soil structure could be critical going forward.”

It’s that foresight that has seen the business go from strength to strength and build on the foundations set over the past four generations.