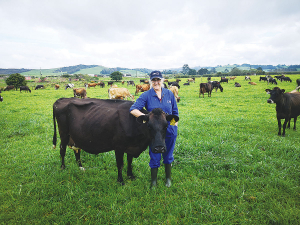 Joanne Polglaze, Kaikohe has been named CRV Technician of the Year for the Northland Region.

She took on a career artificially inseminating cows after her husband David and son Matt were already working as technicians.

As breeding season gets underway around New Zealand, Joanne has been named CRV Technician of the Year for the Northland Region, inseminating over 3500 cows in the 2020 spring mating season.

Joanne completed her technician training with CRV in 2015, after watching David and Matt working as technicians and thinking to herself that she really wanted to try it out.

Now there is healthy competition between the three of them.

"Competition is good. We do compare notes throughout the season. You're always asking, how did your run go today? How many cows did you do?" says Joanne.

"Othere people would look sideways at us and think, 'oh my goodness'."

Joanne says she loves the challenge of working with cows and her non-return rate of 74%, well above the regional and national average, suggests she is also very good at it.

David was her mentor after she did her initial training with CRV. The couple spent a season inseminating large herds of cows in South Canterbury, and another season on the Central Plateau which Joanne says helped her advance her skills.

The couple live on their own farm in Kaikohe, where they have contract milkers managing their split calving herd, which reaches a peak of about 280 cows in milk each season.

While they normally manage their own artificial breeding runs, Joanne says they have been working together at the start of this season before the Northland farms start to breed their herds with more sexed semen. Sexed semen is more challenging to work with as it requires different thawing and straw handling procedures to avoid temperature fluctuations.

"There has been a real trend towards using sexed semen, which helps to reduce bobby calf numbers because farmers can breed heifers, but you do have to be slightly more careful in your handling of it, so we've been making sure we have our practices right," says Joanne.

While the job is now second nature to her, Joanne says learning the skills needed to successfully inseminate a cow were harder than she initially thought.

"I remember watching David in those early days and thinking I could do that. By day two of the training course, I was calling my son Matt and saying it was too hard. He said, 'come on mum you can do it'."

Joanne says Matt was thrilled when she was awarded technician of the year.

"For all of us when we go into the shed our priority is the cows and keeping things calm. Cows are intelligent they can pick up your energy and they know. You need to be calm and quiet with them."

They are not skills that everyone has but she urged anyone wanting to try out the role to give it a go.

"It's definitely become a bit of a family career for us," says Joanne.

In New Zealand, professionally trained AB technicians do the majority of inseminations. They are responsible for the handling and insemination of semen.

CRV has more than 200 technicians across the country.

An AB technician must understand animal anatomy to ensure correct placement of semen in the cow's reproductive tract. The job demands skilful handling to ensure the safety and well-being of both the animal and the inseminator.