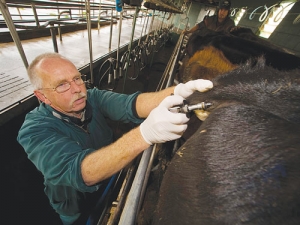 The current TB plan, which runs out June next year, has been a success.

A pland to eradicate TB from New Zealand livestock within 10 years will cut the need to test some herds and will reduce the work in some vector areas.

He says it is “quite feasible” to eradicate TB from livestock within 10 years. This proven by current progress in TB eradication, is confirmed by an independent scientific review and can be achieved quicker and cheaper than previously thought.

TB eradication is already a world-first “remarkable success story”: there were 1700 infected herds in the mid 1990s, but in early July the number was only 41, Kelly says. This dropped by two in just one week at the beginning of July.

If approved, the 10 year TB eradication plan for livestock will cost $600 million over 10 years at $60m a year, but it may have to be “loaded” more at the start of the programme. The average $60m a year budget is $20m less than Ospri now has for the current TB programme.

The $600m plan is the favoured option of three the TB Plan governance group has been ‘roadshowing’ to farmers in 36 locations from June 22 to July 31. The other two options are a $70m a year option for faster eradication or a $50m a year “containment option”. But Kelly warns the containment option, “while seductive”, would “go on forever”— no end date.

All options are now only proposals. After farmer consultation which ends on July 31, a strategic review of the TB plan needs final approval by the Minister for Primary Industries. The current strategy runs out in June 2016, by which time the new strategy must be ready.

The new strategy will be a 10 year plan, in contrast to the current five-year plan.  While previous plans were enacted by the Animal Health Board, this time the plan has an independent governance group with two independent members.

Kelly, as one of the independent members, told a consultation meeting in Pukekohe the current plan in operation is for proof of concept – getting rid of TB in certain vectors in certain areas. The new recommended plan is to rid NZ of TB completely.

Vector kills will first target areas never before targeted or where recent vector-related infections have occurred. Risk based testing of herds will be based on three core variables: herd location, herd history and nature of movements. NAIT will be important in assessing herds’ risk profiles. Disease control and movement control areas will be removed.

Proposed funding arrangements will stay as they are with a levy on milk solids collected through the DairyNZ levy. This is about 1c/kgMS at present. However the dairy industry will pick up a greater share of costs, up from about $24.07m now to $26.7m by 2020-21. Current funding proposals would see the dairy cattle slaughter levy remain at $11.50 a head, then increasing by increments from 2017-18 to $14.05 a head by 2020-21.

The funding proposal would see beef slaughter prices reduce in 2016-17 to $6.25 a head and keep reducing.  The overall beef contribution reduces from the existing $19m to $10m. A levy of livestock exports – currently “freeriders” -- will be imposed at $11.50/head. The levy on Otago landowners will be revoked as they currently pay through the regional council which passes levies to OPSPRI. The Crown will contribute 40% ($24m) and deer contributes $1m.

The changes in the slaughter costs will allow dairy to fix the amount of milk solids levy they pay and make up the difference, Kelly told the Pukekohe meeting. There were options to consider which could include dairy heifers on the dairy levy but old bulls from a dairy farm on the beef level.

Kelly says the current TB plan, which runs out in June 2016, has been a success story, having achieved 44% of the target to eradicate 2.5ha by 2026. The current infected herd rate was 0.15%, below the target of 0.4% and below the international level of so-called ‘TB free’.

A scientific review by an independent Australian scientist showed it was possible to eradicate TB from NZ with “all the good work we have done over the last five years”.

“By doing things differently basically we can achieve it more quickly and cheaply then in the past because we have developed new techniques and improved the concept.

“The eradication option would kill vectors in regions which previously had not had control or where recent incursions have occurred. We will spend more money in problem areas such as the West Coast and less money in relatively free areas, to get the vector risk areas right down. A core component of the programme is to move to risk based testing. We are going to be selective on where we TB test our animals.

With cull animals at 15-20% a year, about 60% of a dairy farmer’s herd gets examined over three years. So there will be less TB testing in compliant animals.

“In those areas where we have a red flag or we hear are unsure of movements because of noncompliance with NAIT, not only will your farms be penalised by more testing, there is provision in the plan to do that. So if you are non NAIT-compliant, particularly exposed through your herd location or your industry, you might have more testing.

Eradication can be achieved sooner than we thought, Kelly says.

To sum up the preferred option: livestock infections will reduce dramatically over the next 10 years down to zero, funding shares have changed based on benefits to the relevant industry values and a new approach to vector and disease control will be adopted.

Chris Kelly says he has seen too many good proposals for the agricultural sector “wrecked by farmer apathy”.

He is asking farmers to make a submission on the TB proposals by the end of July.

So even if farmers go online and say a few words, that’s good, Kelly says. “I’ve seen more good plans fall through from farmer apathy than anything else.”

Analysis of submissions and responses will be available online around August/September and final proposals will go to the Minister for Primary Industries at the end of September.