The rise of the O’Regan farm 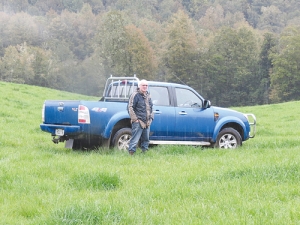 Matt O'Regan is farming the land his forbears settled on nearly 100 years ago. He and his wife Carmel are genuine hard-working, unpretentious people who have worked hard to achieve what they have today.

The Coal Creek Valley where they live is often wreathed in mist and bird song breaks the silence. The O'Regans have been here over 100 years.

"My father's great-uncle was a drover who brought cattle from Nelson to feed the goldminers. He used to rest the stock in this valley.

"In the 1920s my grandfather moved here and with his father's support purchased the property and then worked in local sawmills to earn enough money to develop a small dairy farm. He milked a few cows until the late 1940s when he went out of dairying and started cutting mine props from the native forest for local coalmines. My father and uncle continued working in the bush and built up a native logging business. This continued until the late 1980s."

O'Regan came to the farm in 1978 and at the time live-capture deer was a big business. The property is surrounded by native forest and he set traps to capture deer to earn enough money to buy a share in his uncle's and father's company Mangawaro Enterprises. He also worked in an open cast coalmine to earn extra dollars. While his father and uncle focused on the logging business, Matt O'Regan devoted his attention to developing and managing their sheep and beef farm that had grown from the bush that had been logged. In 1990 he bought his uncle's share of the business.

"In 1994 we took up the opportunity to go dairying by purchasing the neighbouring dairy farm which was separated by the Inangahua River. We milked 160 cows in the first year. We developed that to the point where we had 280 cows by 2000.

"When another neighbouring property came up for sale that was milking around 300 cows we purchased that as well and have got it to the point where it now milks 465 cows."

Further land development and purchases followed over the years. Today he and Carmel have the original drystock block and three farms milking a total of 1500 cows producing 580,000kgMS.

Sharemilkers Tim and Mel Wratt run two of the farms, Matt and Carmel and a manager look after the remaining property.

"Tim and Mel have been with us for 17 years and they are the backbone and strength of our operation. We couldn't have done what we've done without them," he says.

Over the years O'Regan has converted bush and poor land into highly productive dairy pasture. He has cleared scrub and bush and in wetter areas used the traditional West Coast 'humping and hollowing' drainage technique to reduce pugging.

"If you have land on an existing dairy farm that you can develop into dairying pasture the cost of development is probably less than 50% of the value of the land once it's developed. You can develop land and maintain strong equity by borrowing 100% of the development costs."

O'Regan says this is not only good for farmers: the whole community benefits from the extra employment it creates.

Today O'Regan modestly surveys his and the achievements of the O'Regan clan. The farm looks great and the stock are in excellent condition. His story tells about the success of hard work and resilience.