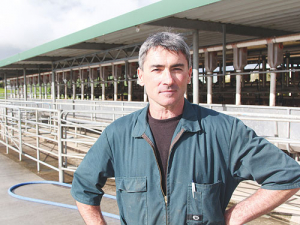 Automatic cup removers are a case in point: more  farmers are installing them in outdated sheds to reduce labour costs and increase efficiency.

“Automatic cup removers have an instant payback,” says Campbell Parker, chief executive NZ of Waikato Milking Systems. “They reduce overmilking of cows and so shorten the time you are in the shed.”

Parker said the trend for farmers to look at “getting more out of what they have by the simple addition of technology” was to the fore at Fieldays.

“We still had farmers coming in to talk to us about new rotaries and herringbones but an increasing number wanted to look at technologies which would help them get more value and profit out of what they have.

“Many have sheds which are no longer efficient and which, during the growth years of the industry, would have been demolished and rebuilt. Now, however, there is a noticeable preference for optimising what they have and technology is the way to do that.

“Automatic cup removers are a very popular option but we also had a lot of interest in the components within our dairy management system. Farmers tell us they have improved milking speed, cow flow and comfort and udder health by retrofitting our clusters.

“Our modular components can be retrofitted into any milking system and immediately give benefits.”

Otorohanga farmers Vernon and Theresa Corbett chose to retrofit an old shed. They sharemilking in Matamata when the option to lease 80ha next door to the family drystock farm in Otorohanga came up.

“We already owned 24ha which I’d been leasing off my family so the opportunity to lease the neighbouring 80ha dairy farm with a 10 year option to purchase was the opportunity we’d been waiting for,” Vernon Corbett said.

The family moved back home in 2007, Vernon recalling the farm’s 18-year-old 21-aside herringbone shed had grown over the years. It started life as a 16-aside with room for 21 bails.

“Right from the start we decided to utilise the length of the pit by adding cups to make it 21 aside and, as I’d be milking on my own and drenching and applying teat spray, we’d add cup removers. I’ve been milking in herringbones with cup removers for 15 years and wouldn’t milk without them.”

He says the plan was to build equity over the 10 years until their right to purchase came up.

“We built the herd up naturally with our own stock, avoiding the need to borrow a lot of money in those 10 years. We just reduced the mortgage to get to the point where it is now.”

Throughout the years herd numbers increased from 180 to 260 and it was at this point that Vernon employed an assistant.

“I’d milk the first herd and the worker would bring in the second herd and milk while I did other things. That worked well. We then added in-shed feeding so we didn’t have to drench.”

At the end of 10 years Vernon and Theresa Corbett exercised their right of purchase and bought the farm.

Achieving our goal of milking 380 cows in a 21-aside was always going to a stretch, says Vernon.

“It needed to be around 32-aside to minimise rows and milking efficiency, so we compared the financial and operational benefits of a new build with extending and retrofitting the existing shed.

“We looked at possible sites for a new shed but the cost of rebuilding just didn’t stack up. The construction of the current shed was sound, it was in a good position and it was relatively simple to extend the pit from 21 aside to 32.”

Rebuilding the shed was the right thing to do. They had been milking cows for 25 years on their own, he adds.

“We didn’t have a big cheque book and so we had to create a dairy which fitted our budget and achieved our production goals for the farm.

“Construction time was tight.  We dried off the herd on 10 May leaving 8 to 10 weeks to rip the old shed apart, extend the pit, build new yards and install the new technology before calving started. As it turned out, we easily achieved that.

“When it came to choice of technology, we went with Waikato Milking Systems. I’d used their gear previously and it’s value for money; we got everything we wanted at a good price and it’s efficient and easy to use.”

The Corbetts are now one season on in the refurbished shed and it’s gone well.

They plan on calving 380 cows in the 2018-19 season and will milk with two people in the shed in the mornings and one in the afternoon.