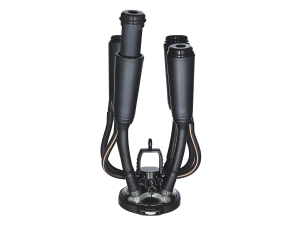 The company had two entries in the competition.

The Evanza is the first cluster in the world to use a cartridge instead of a traditional liner for milking attachment, featuring a simple clip and turn function that allows all four cartridges to be replaced in less than a minute – around three times faster than a traditional liner.

The modularised cluster is smaller, lighter and more durable, with replacement intervals doubled from 2500 to 5000 milkings before the completely recyclable cartridges are replaced.

The unique clover-shaped design of the cartridge means fewer slips, with comparative farm trials showing an increase of up to 9.3% increased milk flow, 5% higher yields and milking times reduced by 30 minutes.

The cluster contains a newly designed claw with redesigned TopFlow technology and an easy, quick-connection between claw and teat-cup. It can be used on any conventional milking system including rotaries, parallel, herringbone and tandem installations.

The DeLaval VMS V310, the latest addition to the VMS robotic milking product line, automatically confirms pregnant cows during routine milking, using technology called RePro to provide an accurate insight into the reproductive status of every cow in the herd.

The technology allows farmers to save both the time and cost of managing reproduction and unwanted open days by accurately identifying heat, pregnancy and miscarriages.

Tail pant has been shelved by a King Country farm — the first in New Zealand to try DeLaval’s automated cow heat detection.