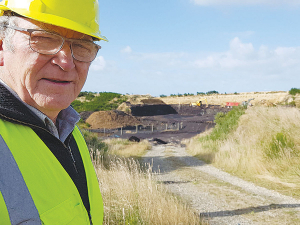 Malcolm Sinclair, Southern Humates, at the mine.

It all started when a small group of soil scientists and farmers considered the potential of humates to improve the quality of soil and the possible flow-on effects on pasture growth.

The group came with the belief that the majority of New Zealand soils have been leached of their nutrients over the years through applications of superphosphates, intensive farming and compaction of the upper soil layer.

Business adviser to Southern Humates, Janet Brooker, says understanding the importance of stimulating microbial activity to improve pasture growth and combining the significance of two bioactive stimulants, humic and fulvic acid, resulted in a move by Southern Humates to investigate the response to pasture growth when humates are included with urea and across a range of other fertiliser compositions.

A four-year field trial commenced in Southland in October 2014 to evaluate the effect on pasture growth through the addition of Southern Humates to urea and was assessed every month until March 2015.

She says in November, one month after initial fertiliser application, 20% humate addition to urea gave the greatest increase in pasture production, 20% more than in unfertilised pasture.

Urea, (3% increase) and other rates of humate had little effect (between 1–3%). In December, urea increased production by 39%, with maximum yield occurring with 5% humate, 45% greater than unfertilised pasture.

In March, a similar response, urea increased production by 39%, with maximum yield occurring with 20% humate, 68% greater than unfertilised pasture.  Brooker says the reason for altering the rates was to increase the number of comparison points to determine the optimum rate of humate application.  The effectiveness of a fertiliser is measured by how it increases pasture yield compared with pasture without any fertiliser application.

“It was these positive results which promoted, Malcolm Sinclair of Southern Humates, to continue investing in the field trials over an extended period and at the same time to look to the opportunity to apply for a patent on the composition of humate and urea to increase pasture production.

The results were assessed during late autumn - early winter 2017.  Ten per cent humate with urea gave the greatest seasonal increase in pasture yield on the shallow soil phase, 37% compared with 25% from urea alone.  On the deep soil phase urea 6% yield increase whereas urea and 10% humate resulted in 9% yield increase.

The residual effect of humate plus urea applied from Nov 2015 to April 2018 on soil chemistry, earthworms and nutrient leaching was assessed in spring 2019.

The company says high productivity would result in more organic residues, the primary food source for organic feeding worms and more microbial biomass for soil feeding earthworms.   Increased aeration, drainage, organic matter incorporation, nutrient turn over and mobilisation are said to be effects of enhanced earthworm activity which are beneficial for pasture production.

Brooker says a patent application was submitted in June 2017 under the case title of ‘Fertiliser compositions and uses thereof’.   The application has been through a rigorous review process over the past four-and-a-half years resulting in patent acceptance in February 2022.  The results have also been published in Nature Scientific Journal.

She says during the patent review, field trial results continued to confirm the importance of Southern Humates to improving pasture growth through stimulating microbial activity to increase bacteria and fungi levels improving nutrient uptake at the root zone.  It must be acknowledged that not all humates are equal in their humic and fulvic levels, carbon content or mineral composition.

“Therefore, the results of field trials relate specifically to the product sourced from Southern Humates site which is situated in Waituna, Southland.  Regular lab testing continues to support the composition level of humate being extracted. The screening process delivers a range of material sizes suitable for various agriculture and horticulture operations.”

Southern Humates continues to be heavily involved in field trials, including:

* A field trial examining the effectiveness for reducing soil aluminium toxicity in the high country commenced on Glenbrook Station, near Twizel in November 2018.

* A field trial examining the impact of reducing soil copper levels in Kiwi Fruit orchards in Bay of Plenty commenced May 2021.

* A 3-year field trial was estanlished in December 2021 in Southland to determine if new scientific research demonstrating microbial bio-stimulation will have an effect on reducing the acidic levels of whey to develop a whey bio-fertiliser.