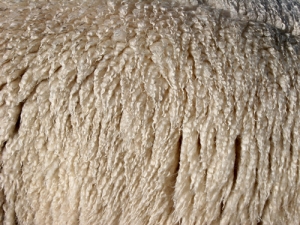 The weighted indicator for the main trading currencies eased 1.59% compared to the last sale on January 7 and accounted for some of the local price increases.

Dawson says that more regular volumes available in the North Island resulted in some sectors easing with more restricted flows in the South Island putting pressure across the board.

Coarse fleece in the south were firm to 2% dearer with the north firm to 1% cheaper.

Second shears in the south were firm to 2% dearer and firm to 2% cheaper in the north.

Fine first lambs were firm to 2.5% dearer with coarse lambs firm to 2% easier.

Oddments in the south were firm to 3% dearer and generally firm to 3% easier in the north.

Competition was good with China and Australasia the principals, supported by Middle East, Western Europe, India and the United Kingdom.

The next sale on January 21 comprises about 7600 bales from the North Island.

The double auctions in the South and North Islands attracted more interest yesterday.

The South Island sale of 8565 bales comprising a wide range of wool types saw good support with 78% of the offering selling.