Oz lamb cooks up a win 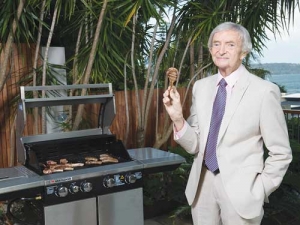 The ‘Richie’s BBQ’ Australia Day campaign ad, developed by independent media agency The Monkeys, claimed ‘TV Ad of the Year’ at the annual Mumbrella media awards with a popular vote of 41,000.

The commercial features Australian cricket commentator the late Richie Benaud calling on the original Lambassador Sam Kekovich and a host
of other national icons – including Captain Cook – to join him in bringing Australians together to share lamb on Australia Day.

MLA’s “You’re better on Beef” campaign also made the final six, recognised for their effectiveness before being put to a popular vote.

“This is one of MLA’s most successful Australia Day campaigns on record in 10 years of campaigns. Our objective is to ensure we drive lamb demand and equally to foster Australia’s love affair with lamb.

“In conjunction with last year’s Spring Lamb campaign, these campaigns have returned $3.99 of value for each $1 of investment,” Howie said.

“We are delighted to receive these accolades from industry, particularly going up against some of the best in the business, and with a significantly smaller budget,” she said.

“For MLA, what matters most is driving demand for red meat in Australia. We will continue to pursue effective marketing programmes that deliver returns for producers and across the industry.”

MLA’s domestic marketing team was also named runner-up in the Marketing Team of the Year, competing against IAG, Tourism Australia, Sportsbet and Barnados.

The new beef ad has also won an international gong as one of only three ads from around the world recognised as a New York Festival finalist.

Euro sprayer industry to get a shake-up

Prolonged drought in Australia and a downturn in agriculture in the US and Ukraine are affecting the European farm machinery sector.