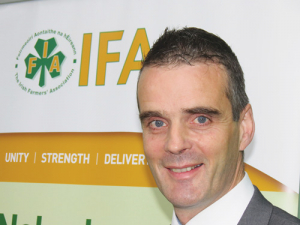 Brexit has thrown up huge uncertainty for farmers within and outside the European Union (EU), says the president of the Irish Farmers Association (IFA), Joe Healy.

A dairy farmer from country Galway, with a strong New Zealand connection, Healy is regarded as a plain speaker and an excellent commentator on farming issues.

He told Rural News, in Ireland, that discussion on Brexit takes place in a vacuum of uncertainty because no one knows what the terms of Britain’s exit from the EU will be.

In Ireland this has created huge uncertainty in the beef sector, he says.

“We have also seen processors take advantage of the Brexit and the move in currency; they are trying to drop prices way below what could be justified,” he explains.

“The beef market for Ireland is very important. We have also seen an increase in dairy cow numbers, and as the use of sexed semen increases. As farmers move for the latter animals in their herd – towards Angus, Hereford or Limousine sires – that will increase the number of beef cattle in Ireland. So getting markets for those will be a critical issue.”

Healy says the British market is critical to Ireland. He notes that 90% of all beef in Ireland is exported and Britain, with its 60 million population, buys at least half this, bringing in $1.8 billion dollars a year.

Hence the anxiety about Brexit.

“But to me this seems unlikely. The fear I have is that the EU will try to play hardball and put in place laws that discourage other countries getting ideas about following the UK.”

For many years NZ lamb exports drew harsh criticism from Irish farmers who considered the cheaper frozen lamb was driving down prices and taking the place of Irish lamb on supermarket shelves in the UK in particular.

But criticism of NZ has largely waned, says Healy, mainly because NZ does not fill its quota to the EU. But this may soon change.

“A lot of our lamb goes into France, which is a very important market for us. We shift as much lamb as possible early in the year so we are not in competition with the UK because when they come on-stream it puts a lot of downward pressure on price.

“From a European and especially an Irish perspective, international trade deals are critical. And within these we cannot afford to have agriculture as the sacrificial lamb.”