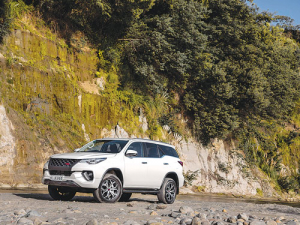 Toyota’s Hilux-based Fortuner SUV line-up has had an aggressive upgrade in New Zealand with the addition of a TRD (Toyota Racing Development) enhanced version.

“It builds on the head-turning features of the Fortuner Limited and follows in the footsteps of other great Toyota TRD models.”

Available in Crystal Pearl, Graphite or Eclipse exterior colours, the Fortuner TRD includes all of the Limited’s luxury and driver-friendly features, e.g. leather-accented seats and a premium JBL audio system with 11 speakers.

A waterborne paint system at Toyota NZ’s Thames Signature Class plant is saving the company $40,000 a year and is kinder to the environment, particularly the workers and the Thames environs.

The plant, among NZ’s largest car painting facilities, has two triple paint and drying booths where six vehicles can be worked on at a time. Annually this cuts solvent use by 50% and energy use by 35%, saving about $40,000 a year.

Though the 12,000L of paint used each year costs a little more, less is used and the drying/curing cycle time is reduced by 35%, requiring less energy.

And fewer volatile organic compounds (VOCs) are emitted from the base coat, better for worker health and for air quality.

Colour matching is said to be easier when only part of a vehicle is being painted.

The upgrade cost $235,000, mainly for air-drying blowers to speed up water evaporation, and retraining for the paint booth staff. Fewer problems and repaints are among the paybacks.