Holden Calais-V not too shabby 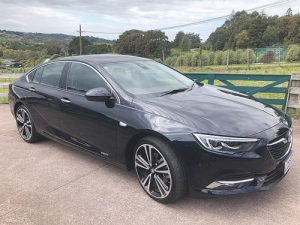 The question often asked about the new Commodore is, “will Aussies accept a German car as a replacement for Commodores made by Bruce?” Or words to that effect.

But the question is slightly redundant because, like the rest of the world, many Australian car buyers have abandoned traditional sedans and wagons in favour of SUVs. The fact that the latest Commie is in many ways the best so far may not help it in the sales wars.

That said, it started strongly in New Zealand, ranking fifth most-popular passenger vehicle in February (this category excludes the new favourite -- utes). Some of these will be dealer demonstrators, but even so there are clearly still a few of us Luddites out there who prefer a large car over a glorified school bus.

Holden loaned us the Calais-V, which sports the impressive V6 AWD drive-train and higher-than-average specifications.

The bread-and-butter Commodores will have turbo four cylinders and front wheel drive – still with a handy 191kW and 350Nm for the petrol four (125kw and 400Nm, diesel) – and these have been well reviewed in Australia.

Like the petrol four, the V6 is bolted to a 9-speed automatic transmission making for exceptionally smooth progress even when your foot is right up it. The 6-speed auto in the outgoing Commodore is fine, but feels slow and clunky compared to this, and the old V6 didn’t rev as willingly as this one or sound as good trying.

The car is poised and balanced. Push it hard through corners and understeer is evident but not intrusive. The handling feels secure and with all-wheel-drive wet roads are not a problem.

Ride is compliant but leans toward firm rather than soft. The ride in the old Calais was perhaps more luxurious, although the new one remains a comfortable car.

Overall, this feels like a well-sorted European car, which is what it is. It works brilliantly on indifferent Kiwi and Aussie roads because Holden engineers spent many months and drove many local miles to retune the car to suit us.

In a direct comparison with the Holden, the Opel ‘donor’ car is apparently much softer and got out-of-sorts on bumpy and broken roads. Holden no longer makes cars in Victoria but all the experience and expertise is still there and is being put to good use tailoring vehicles from GM’s global range to antipodeans’ tastes.

So will drivers of the old Commie like the new one? They should. It is nearly as big in every dimension as the old one, although with its hatchback profile it looks smaller (it is slightly shorter, but only slightly).

And to be honest, it is a better car than the Australian-built Commodore. V8 fanatics will have to look elsewhere, but for anyone else, it’s worth a closer look.