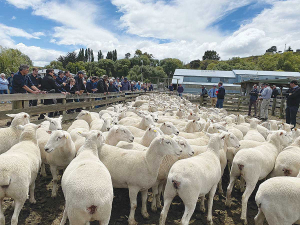 Mt Cass two-tooth Wiltshire ewes sold for $375 to a gallery of willing buyers.

This growing attention on the breed was on display at North Canterbury-based Mt Cass Station’s recent inaugural Wiltshire ram and ewe sale held in January. The sale attracted a big crowd from around the country, with buyers competing strongly for the 3444 Wiltshires on offer, reflecting the growing interest in the low-input, shedding sheep.

Alongside the Mt Cass rams, lambs, two-tooth and annual draft ewes for sale, were two-tooth ewes from Harts Creek farm at Leeston and two-tooth ewes and lambs from Waitui Holdings in the Marlborough Sounds.

Mt Cass shareholders say they could not be happier with the first sale of the station’s Wiltshire genetics, which is the culmination of 12 years’ work developing a sheep suitable for the needs of its organic regime.

“Stock is being trucked to new homes from Kerikeri in Northland to North Otago and we are delighted with three significant volume sales into the North Island.”

Mt Cass Station covers 1800ha of hill country near Waipara, where the Wiltshires, with their inherent internal parasite resistance and resilience, come into their own in the farm’s low-input, organic system. The sheep don’t need shearing, dagging or crutching and they don’t get flystrike, which results in significant savings in shearing, labour and agrichemical costs.

The station’s Wiltshire stud was started to meet a growing demand for the genetics, with its shareholders saying there has been growing interest in Wiltshires from farmers frustrated by on-going depressed wool prices and the work associated with wool production.

They claim the introduction of Wiltshire genetics and progression to a no-shear flock is quite rapid. Within a couple of generations crutching, dipping and flystrike is eliminated and within three to four generations so too is shearing.

While Wiltshires don’t produce wool, they are good meat producers. Mt Cass weans 135-145% off the hill country, with 40% of its lamb crop sold prime pre-Christmas at 16.5-17.5kg carcass weight.

The demand for Wiltshire sheep is “incredible and unbelievable”, according to the country’s major breeder of the sheep that sheds its wool.