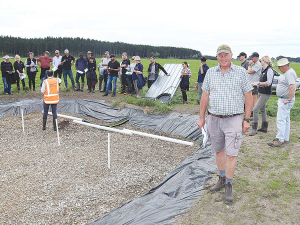 Hew Dalrymple pictured beside the woodchip bioreactor, which has been installed at the end of one of the drains on his farm.

There is no silver bullet because farms are different and what works on one property won’t work on another.

Peter Burke recently went along to a field day where a solution using innovative drainage technology, which is based on good science and with minimal cost to the farmer, is being trialled.

The setting is Waitatapia Station near Bulls in the Manawatu.

It’s a large sheep and beef, arable, commercial growing and forestry operation owned by brothers Hew and Roger Dalrymple. As well as the 1,500 hectare main block, there are two other blocks, bringing the total land area to just over 2,000ha. The actual farm is about four kilometres as the crow flies from the coast.

The soils are sandy or coarse textured and are known as leaky soils because they leach nitrogen. The trial is all about capturing that nitrogen and stopping it going beyond the farm into waterways and treating the water on farm to remove the nitrogen – a bit like a sewerage treatment plant for nitrogen.

It started when local farmer Stu Taylor was keen to find a solution to this issue. Taylor and Hew Dalrymple got together, enlisted the expertise of Massey University and AgFirst, and got funding from the Sustainable Farming Fund. The trial has been going since 2018 and the field day attracted a diverse group from the agri sector.

The solution to the N leaching issue on Waitatapia is utilising the extensive drainage system on the farm. There are large deep drains on the boundary and water run-off is fed into these by smaller drains. Massey soil scientist, associate professor David Horne says the farm is complicated in that while the soils are leaky, the rainfall is low. However, this is somewhat offset by the farm being irrigated and N losses can be high. Horne says the property lends itself to what it is doing – intensive dairying and cropping.

“Because the large drains are on the boundary, this gives us the opportunity to intercept the flow of water carrying nitrogen and manage losses by treating it by installing mitigation measures at edge of field which are practical and low cost,” he told Rural News. “The result is that we can strip out almost as much nitrogen as we like,” he says.

At the field day much interest was centred on a woodchip bioreactor, which has been installed at the end of one of the drains. It looks like an effluent pond in terms of shape and with a lining. But there is no water to be seen – just a flattened out area of woodchips that you can walk on.

However, underneath is where the action is taking place. As water from the drain is released into the bioreactor, the woodchips absorb the nitrogen and, in a matter of minutes, nitrogen-free water flows out.

Another Massey scientist working on the project is associate professor Ranvir Singh, an environmental hydrologist who’s worked in farm drainage systems in the USA and Australia before coming to the university about a decade ago.

Singh says when he and Horne first visited the farm, they realised that the drains held the key to dealing with nitrogen loss.

Water held in the large drains, which has nitrogen in it, can at certain times of the year be allowed to flow back into the soil and this is another way of removing the nitrogen.

“The soil is used as a filter to get rid of the N as opposed to putting it through the bioreactor,” he explains.

Singh says the water levels in the main drains can be simply controlled and this is a significant factor in the process. He says the work being done in NZ is similar to that being undertaken in the USA, Denmark and Ireland.

“Nitrate is an issue in the all the places I have worked in. The systems are a little bit different than in Ireland and Denmark where they have more arable systems, whereas in NZ we have more open grazing,” Singh told Rural News. “But the issue around managing drainage and a bioreactor are similar to those places, so we exchange our knowledge.”

A world of opportunities

The horticulture sector aims for a $20 billion increase in export earnings by 2030.

Leptospirosis is not just a dairy farming problem

New research has shown that dry stock farmers are just as likely to be infected with leptospirosis as dairy farmers.