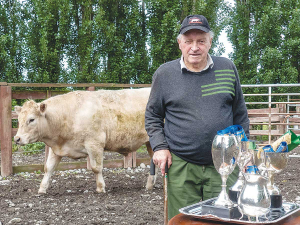 Dunsandel farmer John McCrory with his haul of cups and ribbons having all but scooped the pool in the NZ Agricultural Show Prime Beef competition. With him in his cattle yard is a 748kg steer of the same line as the heifer which won the supreme championship. The steer was also due to be auctioned at the show, during the Young Auctioneers contest. Photo: Rural News Group.

McCrory won five of the six classes as well as the supreme championship. His animals also set a record for the price per kilo liveweight when sold at auction the following day.

The Prime Beef competition is run in four classes for export quality animals – steer, heifer, pair of steers and pair of heifers – and two ‘local trade’ classes for lighter animals more suitable for retail butcheries. McCrory won all but the local trade pair.

Meanwhile, his winning export quality heifer took out the Allflex Supreme Champion award. That animal was a 700kg Charolais/Angus cross.

McCrory said he had done as well in previous years, but never better.
“I don’t know how many times I’ve won. I’ve won quite a few times. I haven’t kept count,” he told Rural News.

That was a record, said the Prime Beef competition convenor Mick Withers.

McCrory, now 78, has previously bred Charolais cattle and run a dairy farm but now concentrates on cropping and beef finishing on his Hollybank property near Dunsandel.

He put up 29 animals in this year’s competition and all were sold.

Withers explained that McCrory had made it “something of a crusade” to dominate the Prime Beef competition, targeting mostly Limousin and Charolais breeds and buying stock from a variety of sources including former Canterbury show president Warrick James’ Ben More Limousin stud.

Because of a shortage of facilities at the Canterbury Agricultural Park, the competition is run about a week before the main show, when the cattle auction ring is co-opted for the shearing competition.

Withers told Rural News the competition was “quite a spectacle.”

“If we had the facilities we’d do it during the show, but we can’t.

“This year we had probably the biggest crowd we’ve had at the sale. We certainly had the largest number [of entries] and by far the best quality we’ve ever had.”

McCrory’s winning local trade heifer, a black Limousin/Lowline cross, was sold to [email protected], a butchery in the Christchurch suburb of Ilam.

The butchery described the meat as “like butter”, which was proudly on display in the window under the winner’s ribbon.