Triplet system a success on farm and at bank 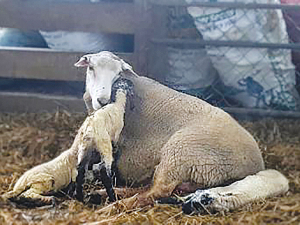 The Dawkins family say the benefits of their indoor triplet system have been far reaching.

This has unexpectedly benefitted the whole farm system and has cut lamb losses. This second of a two-part series looks at the costs and benefits of the indoor system.

The triplet bearing ewes are brought into the shed for lambing, after which they spend 24 hours in a bonding pen before being moved to a nearby paddock.

In the first year of the BLNZ Innovation Farm project, the Dawkins put the ewes and lambs onto the headland of a vineyard for a few days for close monitoring. Last year, they went straight into a paddock – which simplified the process although they were still checked daily.

Orphan lambs are also reared in the shed and fed cow colostrum (from a dairy farm the Dawkins have an interest in), lamb pellets and muesli.

Richard Dawkins says that in 2017 they found the orphan system to be very labour intensive with multiple feeds every day.

Last year, they made a gravity feeder that gave the lambs ad lib access to milk. This cost a fraction of the price of more expensive automatic feeders and was more efficient than filling milk-train feeders several times a day.

The lambs were weaned onto lucerne weighing an average 18kg. The first of these lambs, which were growing at an average of 260gm/day, were sold on December 13 weighing 41kg. The balance of the lambs were carried through for finishing and sold in February.

This year the Dawkins will be using a whey based milk powder. While this costs more than colostrum, they hope it will raise growth rates and will be easier to manage than the 1000L totes of colostrum.

Last year, three ewes were lost to bearings, but Chris Dawkins says a highlight was not having any metabolic issues in their ewes.

This will be a challenge to replicate, but ewe weights and body condition will be closely monitored all year. Metabolic conditions are associated with changes in body condition, weight and diet, but the family’s composite ewes transitioned indoors with ease.

Abortion has been an issue in the Dawkins ewe flock. Last year, they lost 8% of potential lambs despite having vaccinated to reduce losses to disease related abortions. This year they are monitoring the ewes closely with multiple scannings, blood tests and autopsies.

After going through the indoor system and being closely monitored for seven days, the triplet ewes and lambs are run onto a red clover and plantain pasture mix. This high quality forage drove average lamb growth rates of 337gm/day and enabled 55%of these lambs to be sold at weaning at 38.7kg.

Overall, the Dawkins’ achieved a 163% lambing from a 192% scanning across their two-tooths and mixed-age ewes.

“This is very rewarding, as we believe there has been too much focus on high scanning percentages in the past, whereas the real target should be the number of lambs alive at weaning,” Richard Dawkins says.

The family say the benefits of the indoor triplet system are far-reaching. It has improved twin and single lamb survival in their outdoor ewes by making more feed and shelter available for them.

It also allows Chris to focus on these ewes as Richard looks after the triplets indoors.

Everything is included in these costings including some capital costs, market prices for supplements and all labour valued at $20/hour.