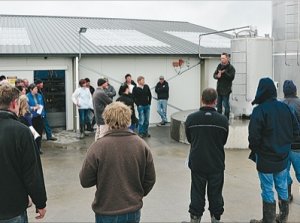 MORE THAN 30 farmers turned out for a field day to see and hear how automation in the milking shed is helping one Canterbury dairy farmer cut cell counts and combat mastitis.

Martin Early, Mayfield, had an Automatic Dipping and Flushing (ADF) milking system installed in his 54 bail, Waikato rotary platform in August last year. He says it's one of the "best things" he has done on the highly productive spray irrigated farm.

An ongoing problem with mastitis in the 920-cow herd had driven him to look for an effective method of controlling it, something he believes he has now achieved thanks to the system.

At the field day Martin showed visitors the system in operation and answered questions, saying his experience with it has been "excellent."

ADF says Early's experiences and opinion of the success of the system echo those of other farmers throughout the country.

While most farmers follow traditional best practice methods to control mastitis, such as dry cow therapy, proper maintenance of milking equipment and treating clinical lactation, the firm says the cornerstone has always been teat spraying which can be both time consuming and prone to human error if staff are less than thorough in what they are doing.

Developed in the UK, ADF Milking has been operating since 2004. The system, designed to disinfect the teat immediately after milking and sanitise the cluster between cows, has already proven popular overseas and is being used on farms in Europe, the US and Canada. It was introduced in New Zealand and Australia two years ago.

"New Zealand dairy farmers are a bit more cautious than farmers overseas and are looking at results," says Duke.

"Mastitis is the biggest cost dairy farmers have and until now it was not easy to control, but looking at the figures they were generally happy with the results they saw for ADF.

"New Zealand is an exciting market and farmers here can benefit greatly from the ADF system. It was made for people like New Zealand dairy farmers."