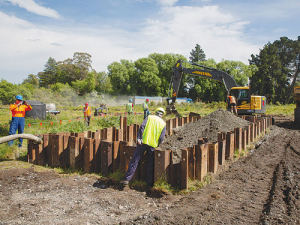 The trial is led by the Institute of Environmental and Scientific Research (ESR).

So far the nitrate levels in groundwater have been reduced from 7.1mg/L to 0.5 mg/L by the wall at Silverstream Reserve.

The 25m-long wall, installed eight weeks ago, is a world-first: no denitrification wall has ever been tested in a fast-flowing gravel aquifer system such as the one at Silverstream.

“The wall itself is effectively removing all of the nitrate in the groundwater that passes through it. We are seeing a plume of treated groundwater extend down-gradient from the wall.”

The denitrification wall acts as a groundwater filter. Woodchip mixed with gravel removes nitrate from groundwater passing through the wall. Carbon from the woodchip provides a food source for bacteria within the ground to convert nitrate in groundwater to a harmless di-nitrogen gas (N2), which makes up 80% of the atmosphere.

The wall is split into two 12.5m sections, each filled with a 50:50 mix of woodchip and gravel. The wall is 3m deep x 5m wide, the width being determined by groundwater velocity and nitrate concentration.

Burbery says two different mixes are being tested within the wall to determine which type of material is the most cost effective and efficient at removing nitrates.

“One has 20-40mm gravel rounds mixed with chipped wood. The other is material dug out of the site, screened and mixed with hogged wood.

“The second option could work better for landowners as it’s more cost effective.”

The test site was selected because of its shallow water table and high nitrate levels and it is far enough from Silverstream to ensure that the operation of the wall will not adversely impact the waterway.

“We have 34 monitoring wells on the site which will be increased to about 50. It’s important to ensure that there won’t be any adverse effects with pollution swapping from the woodchip, but we haven’t seen any evidence of this so far.”

“We’re pleased with the positive results to date and this ties in with other projects in the Silverstream catchment – including the joint ECan-WIL infiltration trial and monitoring sites set up along the waterway.

“This year we’re focusing on ‘Clean and Green Silverstream’... cleaning up the stream and greening the banks... everyone working side-by-side to cover the entire catchment from the springheads to the Kaiapoi and Waimakariri rivers.”

The trial will run for two years, while the actual wall itself is expected to work for about 30 years. ESR lead scientist Murray Close expects the site to function as a demonstration model to show landowners how the concept works.

“We’re trying to establish guidelines on how denitrification walls work, and this site will provide a practical example.”

Due to the expense of sheet piling when constructing the wall, Close says denitrification wells could be a more cost-effective option for landowners.

“One possibility is offset lines of wells. You could drill one-metre diameter wells and fill these with a mix of gravel and woodchip. The casings would then be removed, and this would work in a similar way to denitrification walls, but without the cost of sheet piling.”

He believes that denitrification walls could be part of the answer to reducing Silverstream’s high nitrate levels.

“All of the work being done at Silverstream addresses different parts of the puzzle. Our piece of the puzzle is what we can do to address the nitrates that are already in the groundwater. It will take a combination of approaches to deliver the improvements that we want to see for Silverstream.”