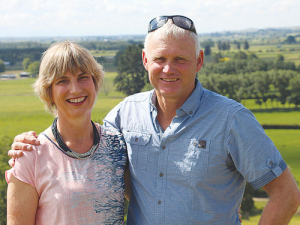 Meeting other entrants and finding out about the work everyone else was doing were highlights of the Ballance Farm Environment Awards for Waikato finalists Peter and Karen West.

“It was interesting to see what everyone else had been doing off their own bat, most of it common sense stuff for the future of their farms,” Peter West says.

“We also got good feedback about what we’re doing and ways we can improve ourselves.”

The Wests, who won the region’s LIC Dairy Award, milk 409 cows on 144ha (effective) on the edge of the Hauraki Plains west of Ngatea.

The couple started 50:50 sharemilking in 1985 and three years later bought the first 35ha of what is now the 109ha farm they own. The balance of the farm is leased.

As first-time Ballance Farm Environment Awards entrants, he says they wanted to be proactive and better prepared.

“There’s a big truck coming and we can sit in the middle of the road and wait for it to run us over or we can be proactive and put something in place to protect ourselves from it,” West adds.

“It’s not a scary truck; we just like to stay ahead of things. We don’t want to get caught by regulations and end up on the back foot.

“The message is to be aware of what’s happening and how things can affect you, your farm and your area.

“That’s where the awards were good. We met some cool people and gathered some good ideas.”

He says their farm is at the ‘what’s next?’ stage of development and the networking and personal growth as a result of the awards has come at the right time.

“There’s all this environment stuff coming up and we have an interest in how we can do things better, how we can be more sustainable on our block of land and how we can make a difference.”