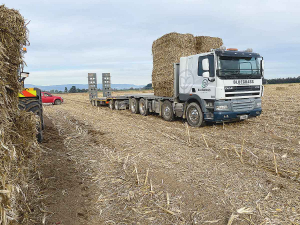 A scheme harvesting and carting maize stubble to dry regions is proving useful.

But this is no ordinary season – most parts of the North Island are experiencing their driest first half of the year on record.

To date, the scheme has delivered 1236 bales of maize stubble and about 400 bales of grass silage to affected farmers.

“These farmers couldn’t secure winter graziers to take their cows during winter and wanted me to help them find feed,” he told Rural News.

Moore, who worked for a hay and straw merchant in the UK, decided to approach local contractors and farmers.

The maize stubble is mixed with inoculants to prevent it from going stale.

Moore says with 70% drymatter (DM) and low metabolism energy and protein, maize stubble isn’t a complete feed but can be mixed with PKE and silage to keep cows fed after they are dried off.

He thanks the contractors for harvesting and cartage.

“They haven’t put their rates up and are not out there to make money from someone else’s misery,” he says. “This is a team effort to help farmers facing acute shortage,” he says.

The maize stubbles are harvested from farms owned by commercial vegetable growers Balle Brothers and Wilcox, who plant it as a rotating crop behind their onion crops.

Aitcheson told Rural News that the maize stubble is another tool in his toolbox to keep cows fed without biting into his winter hay stock.

“You can only feed cows so much PKE, so the stubble helps stretch the feed at a time like this.”

Aitcheson says the Hauraki Plains is suffering one of its worst droughts: last week’s 6mm rainfall was the first in many weeks.