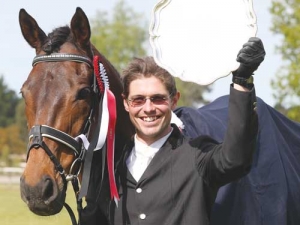 In the early 1980s the sport of eventing was emerging as a possible contender for international honours.

Mark Todd had won the Badminton Horse Trials in England in 1980, riding Hawkes Bay bred Southern Comfort. Eventing was a minority sport with a two month autumn season then, but efforts were being made to expand into spring, to further riders’ experience.

With this in mind a delegation from the Central and Southern Hawkes Bay Horse (C&SHB) trials committee sought permission of Hawkes Bay Farmers Meat Co to build a cross-country course on its Takapau freezing works farm, Arran Station. This was granted and the first event over a combined cross-country/showjumping track ran on November 10, 1985.

Thirty years on and the venue has become home to the Arran Station Horse Trials which attracts competitors from throughout the North Island.

C&SHB Eventing, as the group is now known, has weathered three changes of venue ownership, the freezing works having been bought by, first, Richmond, then PPCS then the present owner Silver Fern Farms. All have been generous and co-operative landowners.

Such is the reputation of the Arran Station event that C&SHB Eventing was invited to stage the 2015 National Eventing Championships. It is a major challenge for a small rural group to host such a prestigious event in the current economic climate, but the committee is dedicated to providing a fitting occasion for the national championships and for the 30th anniversary of that first, low-key event.

The championships will be held this Labour Weekend, with dressage and show jumping on Saturday October 24 and the cross-country on Sunday October 25.

There are four title classes from 3* (Advanced for the Forest Gate Trophy), 2* (Intermediate for the Waiteko Trophy), 1* (Novice for the Ferndale Salver), and 105cm (Pre-novice for the Blyth Tait Trophy), and all the usual lower level and age group classes.

The Forest Gate Trophy is the oldest eventing trophy in New Zealand, first presented in 1956 in honour of Duncan Holden, a co-founder of the NZ Horse Society (now Equestrian Sports NZ), who lived at Onga Onga in Central Hawkes Bay at his property called Forest Gate.

The National One-day Event Championship as it was then, became known as the Forest Gate, still called that by long-time followers of the sport, though intermediate and novice championships were added subsequently, and latterly a pre-novice title as well. The many entries received now require the three disciplines to be held over two days to cope with the logistics.

The last time the Forest Gate was held in C&SHB was 1982, at the previous venue, Larry White’s property Sherwood, at Ashley Clinton, near Takapau. It was a quality field of eight competitors, with the White girls from Otane taking top honours ahead of Mark Todd.

Tinks (now Pottinger) was the tile winner on Mary Wilson’s Two By Two, with sister Ginny second on Aachen, and Mark third on Beaumont.