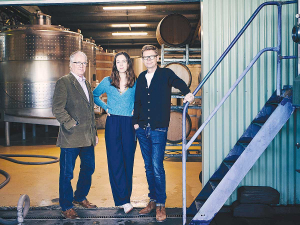 In fact, the couple’s first business venture in their new country was founding Awapuni Nurseries just out of Palmerston North. The family still own the business. But they also own the oldest family owned winery in Bridge Pa Triangle – one of the special sub regions of Hawke’s Bay.

Son and co-founder Paul who runs Alpha Domus says the family were looking to diversify outside of the nursery back in the late 80s. Grape growing seemed like a good idea, and when they found a 20-hectare block in the area now known as Bridge Pa Triangle, they knew they had found what they were looking for.

“When we came across it, it was completely barren,” Ham says. But, it had all the elements that you need to develop a top quality vineyard and grow extremely good grapes.”

The 20 hectares was planted out over three years, from 1991, with Merlot, Cabernet Sauvignon, Cabernet Franc and Malbec, Chardonnay and Semillon.

While over the years the varietals have changed, close to 50 percent of those original vines are still producing – providing fruit for their top of the range wines, which includes The Aviator an iconic Hawke’s Bay Cabernet Merlot Blend.

“The vineyard was also planted with Pinot Noir and Sauvignon Blanc. Now we have pulled both of those out and they have been replaced by Syrah,” he says. “The soils here produce fantastic Syrah.”

Not only has Alpha Domus come a long way in 30 years, so too has the Bridge Pa Triangle. When the Hams first bought the property, Ngatarawa was the only other winery in the region. (The label has since been sold to Mission Estate). Today there are six or so wineries in the area and a number of other major brands with vineyards providing fruit for their labels.

“There is no resemblance to the area when we started,” Ham says.

Along with celebrating 30 years since they first put their roots down in the area, the Ham family now have a third generation working in the business. Paul and Kathryn’s daughter Beatrix has recently become involved and is the brainchild behind one of their newest releases – a Sparkling Rosé made from the oldest Merlot vines, – appropriately named Beatrix.

Aimed at the younger consumer, Ham says it is important to continue to engage with wine drinkers, especially those coming into the market.

“It is a changing environment, it has changed a lot since we began and it is constantly changing. Previously we had no sparkling wines, now we have two. We never had Syrah, now we have three. Over time you need to remain relevant and authentic, that’s always been our philosophy.”

What's in a name?

Where did the name Alpha Domus come from? It’s actually an amalgamation of the initials in age descending order of the two generations of Hams who bought the original Bridge Pa land back in 1989.

A is for Anthonius – dad

P is for Paulus

H is for brother Henri.

A is for youngest brother Anthony

Domus is Latin for home.

Alpha Domus, the home of the Ham family and their wine.