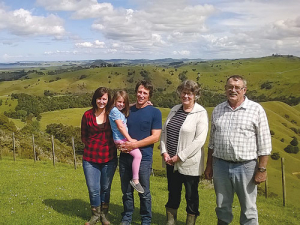 Family teamwork and a multi-generational attachment to the land are said to have created a successful and sustainable farming business with many environmental highlights for the Dills at Kaipara Flats.

The father-and-son duo Bruce and Steve Dill farm the 488ha sheep and beef property. They are supported by Bruce’s wife Felicity and Steve’s wife Clare, who also works in communications and marketing consultancy.

Three quarters of the Dills Farms Ltd land is steep and the home farm has spectacular views looking west to the Kaipara Harbour and the Hoteo River.

The awards judges said this is both an asset and a liability because of winter flooding and erosion and sediment control. But it is also the setting for their eco-tourism venture -- a rental farm hut and farm walks.

Clare runs a social media campaign called Grass Fed in the City with near-neighbour and friend Nicky Berger; they aim to improve relationships between rural and urban people.

The original Atuanui farm, at Kaipara Flats, was bought by Marcus Gordon Dill in 1889 and now fourth-generation Bruce and fifth-generation Steve are the directors of the much-enlarged Dills Farms Ltd.  A neighbouring 135ha block was bought after Steve returned from working overseas.

Knowledge and understanding of the land, ecosystem, weather patterns and stock over the years is being passed on from previous generations. Knowledge of soil types and capabilities enables sustainable management of the farm.

Sediment loss to the Hoteo River is the main risk, managed by riparian retirement, three-wire electric fencing on flood-prone banks and low intensity stocking policies in sensitive areas, especially over the winter.

Stock water reticulation is crucial, using a variety of dams, reservoirs and springs to pump to header tanks for delivery of water to troughs.

A 2008 land and environment plan is being worked, providing stock management, planting and fencing policies. At least 10,000 plants have been planted – 3000 of them last winter as part of the Forest Bridge Trust scheme in the Kaipara District. These plantings are to reduce the sediment in the Hoteo River and enhance biodiversity.

The Dills have started their own nursery to build up manuka seedlings and poplars for the farm.

Erosion is a problem on the steep slopes and kawa poplars are planted to mitigate soil slip and for tomo stabilisation.  Four small areas of native bush are fenced for some time (one since the 1940s) to contain mature native canopy species such as taraire, titoki, rimu and totara 15m tall, plus a healthy understory.

The farm drains to the Hoteo River and the fencing and riparian planting by the Dills and adjoining landowners have improved water quality, including sedimentary and nutrient run-off.