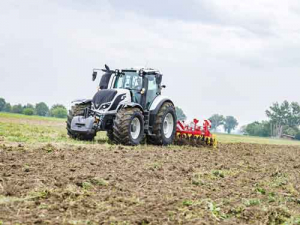 The Valtra T254 Versu won the coveted Tractor of the Year 2018 (TOTY) and Best Design 2018 awards at Agritechnia 17 in Germany last month.

The Valtra T254 Versu won the coveted Tractor of the Year 2018 (TOTY) and Best Design 2018 awards at Agritechnica 17 last month in Hannover, Germany.

“The Valtra sets a new standard in intuitive operation and offers high levels of comfort, performance, efficiency and versatility,” the jury said.

“The SmartTouch armrest with 9-inch touch screen, the multi-function drive lever and the new hydraulic joystick offers the most straightforward user interface in the sector, allowing the driver to control and adjust settings for the engine, transmission, hydraulics, guidance and telemetry.”

The latest model of the T Series, the Valtra T254 Versu (271hp), launched in June 2017, is described as an arable workhorse that, with SmartTouch, brings precision farming tools to the same user interface as the tractor controls.

The new armrest control is said to increase the productivity of any tractor/implement combination while lightening the workload for the driver. Separate profiles can be assigned for individual drivers or tasks, with settings automatically saved to the active profile.

A 5-step powershift transmission has four main and two creeper ranges for a total of 30 speeds in both directions; shifting is effortless whether operated automatically or manually with the drive lever.

The T254 Versu also has a hill-hold feature for uphill starts using just the throttle pedal, and patented hydraulics assistant that provides more hydraulic output automatically, whether stationary or driving, with no effect on speed.

An intelligent drive lever gives speed increases by pushing forward and decreases by pulling back, keeping acceleration in full control at all times. There is no switch to change between lever and pedal mode, as they work in prefect sync all the time.

Driving with the drive lever is a new feature that provides more flexibility for the operator, and is said to make the Valtra Versu models the only powershift tractors in the world that enable full operation using only the drive lever.

Valtra has won a major international design award for its tractor SmartTouch armrest and interface between operator and machine.