The Wrangler - a success story boosted by Fieldays 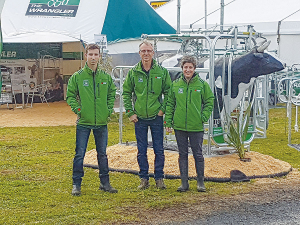 Waverley and Wilco Klein Ovink and their son Josh, who is part of the team building product as well as salesman at Fieldays.

When it comes to award-winning innovation, Waverley and Wilco Klein Ovink got started early.

Twenty-five years ago, they invented the Wrangler, an innovation that has changed the game for farmers all over the globe.

She recalls that originally Wilco made the Wrangler to make their jobs as sharemilking easier.

“It was taking two people to treat a cow: one to hold the rope and the other to examine the hoof, and it wasn’t safe for any of us,” she says.

“As a cadet, Wilco watched a cow being treated for lameness, but she fell and broke her hip. It had got him thinking there had to be a better way.

“We looked around to buy something and were surprised to find there was nothing here for holding and treating a lame cow – so Wilco built one.”

It was so novel that they were able to take out a patent on securing and lifting a hoof.

Soon vets wanted all of their farmers to have one.

They suggested the couple take their innovation to the Fieldays.

“It was there talking to farmers at Fieldays that we started to find the true extent of lameness in the dairy industry.

“Every farmer had hoof knife scars on their arms and just considered it part of farming, and we heard from guys getting kicked in the head by cows.

“It was normal to put off treating cows, farmers would just give her a jab of penicillin and hope she’d come right, not realising how much a lame cow really cost them by being sick. Some of the figures of the number of lame cows on farms was staggering.”

Waverley says when designing the Wrangler, they wanted something that would not only hold the hoof, but the cow too, and stop her falling during treatment.

“It needed to be bulletproof, multifunctional for every type of veterinary procedure we might need, and able to sit outside and be maintained just with a yard hose.

The couple were stoked to win the Fieldays Prototype Award in 1995.

Waverley says the judges were very excited to see the Wrangler.

“The encouragement they’d given us spurred us to refine it further, coming back the following year and winning the New Equipment Innovation Award in 1996.”

“We’ve gone on to win many national and regional business awards since, particularly for innovation, and it’s always a great boost to business.”

While it's still to be confirmed when they'll arrive in New Zealand, Massey Ferguson's new MF 7S series has launched in Europe.