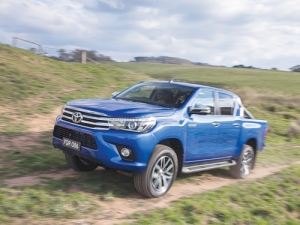 There's no doubt about Kiwis’ love affair with the Toyota Hi-Lux: 104,469 units sold since its launch in the late 1970s.

But traditional buyers feeling the ‘itch’ in the last two years have tended to stray into a ‘tryst’ with other brands, perhaps because Toyota had extended the sales period of the current generation VII models to 11 years, rather than the more conventional seven years.

But things are about to change!

Utes, big players in New Zealand, account for about 20% of total sales.
In the year 2014, Hi-Lux held the No.1 spot in the 4x4 sector with a market share of 27%, but fell to No.3 in the highly competitive 4x2 arena with a share of only 16%, and saw the Ford Ranger pip them by 556 units to taken the overall first place.

Toyota NZ general manager sales, Steve Prangnell, comments that “the loss to the blue oval in the last two years could squarely be put down to a gap in the current product range that did not include an automatic transmission in the 4x2 sector, which accounted for around 40% of sales”.

At a recent media event at Toyota NZ in Palmerston North, Prangnell said the Toyota Hi-Lux “had held the position of NZ’s favourite ute for 32 years since its launch, and the Generation VIII would win that crown back with the most extensive Hi-Lux line-up yet”.

And so it should, with a range boosted to 21 variants from the current 12, with nine all-new models – five with automatic transmissions and three with 2WD. Those 2WD machines will be offered with the cab of the 4WD for better visibility and a “tougher” look, and are aimed at users who don’t need 4WD, but want to look the part.  The 21 variants will be spread over four ranges: S, R, SR5 and SR5 Limited and will see a host of changes.

Hi-Lux will be longer (+75mm), wider (+95mm) and have greater ground clearance (+64mm). The chassis frame, rails and cross-members will be bigger by up to 30mm, and overall there will be an additional 120 weld points. This increase in dimensions will incurr a weight penalty of 270kg, but will raise payload capacity by 11% and towing capacity by 25% to a whopping 3500kg.

The fit and finish of the new Hi-Lux has a greater attention to detail as demanded by today’s buyers, so there is more chrome, more alloys and terrain specific tyres, and better lighting at the front end. Neither is the rear end left out: a longer, wider tray will take a standard 1m Euro pallet, and will have modern pre-requisites such as a rear view camera, privacy glass and black running boards.

Two engine variants will be on offer: an all-new 1GD, 2.8L diesel delivering 130kW and up to 450 Nm torque, and the current 1GRFE petrol engine with 4.0L, V6 configuration developing 175kW power and 376 Nm torque. Interestingly, the new diesel will appear first in the new Prado SUV sometime soon.

As expected with any new vehicle launch, safety is always a long way up the agenda and the new Hi-Lux will have seven airbags and rear view cameras along with ABS, traction control and an extremely useful function called trailer sway reduction.

The vehicles for the NZ and Australian markets will be built in Thailand, and will be on offer with confirmed specifications and prices during the last quarter of the year. They should set the scene for Toyota to recover its crown in 2016.