Taking tech into the paddock 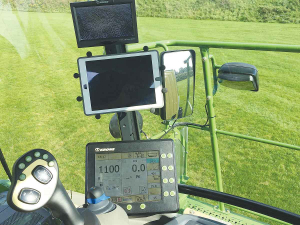 The Krone SmartConnect controller in the cabin.

At the heart of the system, the Krone SmartConnect controller manages the data stream from the machine to a tablet in the operator cabin.

Depending on the machine in use, the system can use GPS tracking to show the farmer/owner where each bale is in the field. It also displays the weight and moisture content of each bale and the composition, including data on fibre, starch and ME.

Also, to suit administration, data can be provided on the time taken to complete a job, with track and tracing from the office to generate invoices as work is completed.

The system is already built into Krone BiG-M mower and BiG-X forage harvesters. The latter can be equipped with optional moisture and flow rate meters to measure tonnage through the machine.

The newly released BiG-X 1180 flagship harvester also uses NIR (near infrared) sensors to detect the nutritional value of a crop.

SmartConnect can also be retrofitted in Krone’s current round and square balers. And the BigPack square baler can collect data on bale drop position, count, moisture and weight.

The SmartConnect will in future form the interface to the ‘agrirouter’ – a universal interface, joint project between leading European manufacturers. This will allow farmers, contractors and app developers to share machine data irrespective of machine brand.

As SmartConnect is ISOBUS capable it can also work seamlessly with similarly equipped brands.

Dealer training is underway, centred on the Krone machine data interface tool that will allow software updating and configuration of an ever-expanding range of optional equipment.

Easycut lives up to its name

A new EasyCut B950 butterfly mower from German manufacturer Krone looks to have hit the mark with users.

Any company that has a 50-year relationship with a supplier is justified in feeling proud.

While the German manufacturer Krone can claim a history dating back 115 years, its large square balers are much more recent.

Much like the price of petrol, the power outputs of self-propelled forage harvesters continue to rise.