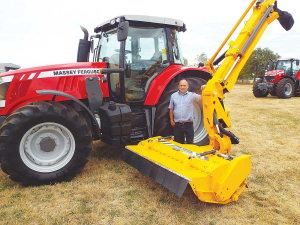 However, many of these rely on inertia – meaning that large pieces of debris are often left in roadways or paddocks, leading to problems with punctures or hoof ailments respectively.

This has led to increased interest in European-built machines that use hydraulically driven rotors with flails, such as the Shelbourne Reynolds range brought to NZ by Hamilton-based Ag and Civil Machinery Direct. Importantly, the design of these machines sees any debris “chopped” to a small particle size that after cutting is deposited back in the hedge bottom.

The company reports that despite a range of 12 models, most interest is around the high-capacity machines in the HD 800 series. It says the HD 875 VFRT is proving to be the most popular.

Featuring a five-point mounting system that combines axle brackets and subframes. The machine offers parallel arm geometry and a telescopic boom to achieve reach of 6.2 to 7.5 metres and 1.6m rearward and 2.5 metres forward reach. This means that during operation visibility is particularly good as the cutting head will typically be alongside the side entry to the tractor.

The layout of the machine sees an integral 230 litre hydraulic reservoir and integral cooling system. This allows oil flow from the 85hp hydraulic pump to be delivered to a 1.5 metre cutting head that also incorporates an 85hp motor. The cutting head carries multiple swinging, cast steel “T” flails that leave a smooth finish, while also offering roller options for use with units dealing with roadside verges.

Looking at the construction in more detail, high grade steel is used extensively in the boom design, while also incorporating 60mm diameter pivot pins fitted with phosphor-bronze bushes. For the NZ market, the favoured control system uses an electric over hydraulic configuration, which allows proportional control. This also enables the variable reach and telescopic functions to be used simultaneously. For transport, the boom can be slewed to 103 degrees from the lateral position, bringing it well behind the tractor to reduce overall transport width.

The financial, operational and managerial benefits of Ceres Tag ear tags are significant, according to Kenneth Irons, managing director at Precision Farming.