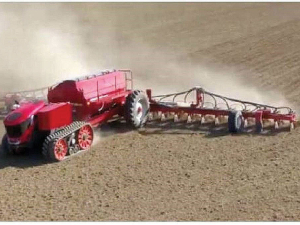 Horsch says it is at an advanced stage with developing an autonomous planter and will release more details soon.

German farm machinery manufacturer Horsch says it is at an advanced stage with developing its aptly named Robo autonomous planter and will release more details soon.

The new technology was spotted recently on social media, with a video showing one of the company's large red planters being towed to a field by a truck, then being put through its paces drilling corn. The development has been confirmed by chief executive Phillip Horsch with the Robo planter undergloing real planting trials.

"The Robo works well, planting autonomously and making turns unaided on the headland etc," he explained.

Horsch also noted that because safety regulations in Germany are so strict for fully autonomous vehicles that a supervisor/operator has to stay within 600 metres and always be watching the machine.

He confirmed that two more autonomous "concepts" would follow the Robo planter by the end of the year. The autonomous machine is likely to be released in about two years, subject to ongoing efforts to relax the current stringent regulations. The company also manufactures trailed and self-propelled sprayers and is said to be keen to develop robotic versions of these machines as well.

Horsch says the autonomous planter was likely to be released for sale in about two years, depending on efforts to change current regulations.

Running on a twin-track system, the Horsch Robo is equipped with a Trimble navigation system and fitted with a large seed hopper that supplies the 24-row Maestro seeding element.

Made in New Zealand looks at the wealth of design and manufacturing ability we have in New Zealand, creating productive and cost-effective products for the agricultural sector. Machinery editor Mark Daniel takes a closer look at Trimax Mowing Systems, catching up with owner and founder Bob Sievwright.