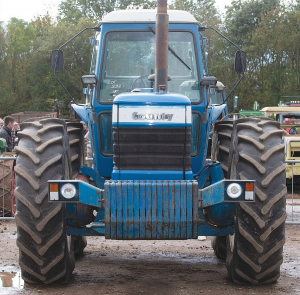 The tractor, described as original and showing only 3833 hours, has been in the same ownership for 35 years.  It is believed to be the third example to come off the production line. Only 30 examples of the model were made.

Based on the Ford TW-30, the County 1884 was launched at the 1980 Smithfield Show held at Earls Court, London. It had a turbo-charged and inter-cooled engine that delivered 188hp.

The tractor was the first ‘long-nose’ County – the stretched hood housing the oil cooler and the fuel tank – with the F-type flat deck version of Ford’s Straddle-Q cabin with air conditioning fitted as standard.

At the time, these high-specification tractors carried a hefty price tag of GBP 34,531 (NZ$69,000), with only a handful built before the company went into receivership in 1983.