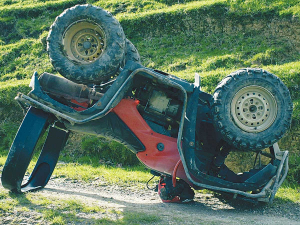 The LifeGuard comprises a plastic arch that flexes during a rollover to absorb the impact and protect the rider.

The company is already known for its ATV LifeGuard – a flexible crush protection device (CPD) that folds around to create a ‘survival space’ for a rider during a rollover.

The new model weighs only 7.2kg, about half that of the LifeGuard product. It comprises a plastic arch that flexes during a rollover to absorb the impact and protect the rider. It can also create a survival pocket under the machine.

Ag-Tech says the structure’s greater rigidity may create more survival space in some situations than its more expensive CPD.

Unlike the LifeGuard, which may be re-used after a rollover, the QuadGuard must be replaced if it has been deformed. In use, the LifeGuard will require more maintenance to ensure the integral cables are kept at the correct tension, whereas the QuadGuard has no moving parts.

The QuadGuard has five years life expectancy which will be monitored annually and confirmed in 2024. Whereas the LifeGuard can be used indefinitely subject to regular maintenance and eventual refurbishment.

A Kubota RTV-X1140, the highest horsepower RTV in its class, has been tried and tested by Taranaki farmer Kevin (Smiley) Barrett – who also happens to be the father of three well-known All Blacks.