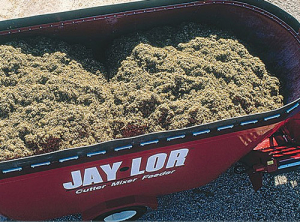 Canadian TMR specialists Jaylor say the purpose of its TMR mixer is to create a homogenous mix that resists sorting by the animals being fed.

Phillipi accuses competitors of claims that have no bearing on the purpose of a TMR mixer – to create of different ingredients a uniform, homogenous mix that resists sorting by the animals being fed.

Jaylor (the name originates from the names of owners Jake and Lorraine Tamminga) is located at Orton, 60km from Toronto, Canada.

The family business started in 1993, aiming to make a mixer to deal with the large round bales of hay and silage that had become increasingly popular during the late 1980s.

He developed a vertical auger concept that remains to this day; its development during the ensuing years led to 36 patents -- six of them applying to the auger design.

The patented Square-Cut auger cuts and carries material upwards in the tub, then releases it to tumble downwards to achieve mixing.  The sloped top of the auger prevents bridging of round bales, allowing them to be cut rapidly and achieve a good mix in a shorter time frame.

A novel side plate gathers material, moving it to the centre of the auger for lifting and reducing friction  between the auger and the tub wall, cutting power need by 20% and helping extend the life of the tub.

This contrasts with manufacturers statements about ‘re-lining’ options for their machines. Simple Perspex viewing windows in the tub allow the operator to watch the mix in progress and decide when it is ready.

Cutting is achieved by a combination of carbide-coated horizontal and vertical knives that are self-sharpening and durable for long working life.

Depending on the size, suspension can have single or tandem axles and single or twin tyre assemblies.

Discharge options include front, rear or side door combinations and the choice of a drop floor or different discharge conveyors for various feeding situations.

Coolbreene Trust near Taupo is a large-scale dairy operation farming 1150ha, including run-off blocks, within a 10km radius of its home base.

A self-propelled, twin vertical auger mixer wagon from KUHN dubbed the SPW Intense has been designed with nutritional considerations in mind.

One of the more interesting first-time exhibitors at National Fieldays was Storti, from Verona, NE Italy, showing a self-propelled, self-loading mixer wagon. This large machine was catching the eye of large scale dairy farmers.