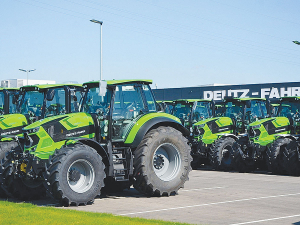 European tractor registrations for 2021 reached their highest level in the last decade.

Despite ongoing problems caused by Covid, European tractor registrations for 2021 were up by around 17% over 2020 and reached their highest level in the last decade.

It’s reported that the market reached 230,000 “tractors” across Europe. However, the trade association CEMA reports the number of real tractors was just under 180,00 units – after removing quad bikes, side by side vehicles and telehandlers that are all recorded in the overall numbers in some countries.

The United Nations Food and Agriculture Association reports     that 2021 food prices averaged around 28% higher than 2020, reaching their highest level since 2011.

Registrations varied from country to country. However, the key markets of France and Germany, which jointly account for four out of ten of all tractors registered in Europe, saw rises of 10% and 9% respectively.

In contrast, growth in Italy and Poland – the third and fifth largest markets – were especially strong at 36% and 42% respectively. Adjusted numbers saw France record a total of 36,053 tractors, Germany 34,472 and Italy around 24,000 units.

CEMA reports that while demand currently remains high, its members are expecting to see a shortage of product over the coming months; Particularly for tractors and harvesting, thereby putting pressure on expected delivery dates for harvest in July and new season cultivations in the European autumn.

From a manufacturer perspective, most companies are reporting that they expect production disruptions over the coming months. Mainly because of the ongoing Covid situation, but also increasingly due to a shortage of component supplies – such as wiring looms that are usually produced in the war-torn Ukraine.