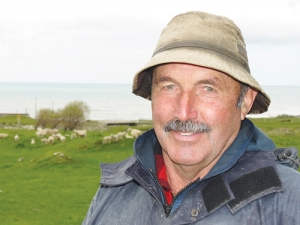 John McFadzean has farmed in Wairarapa all his life and is a staunch supporter of the Southdown as a terminal sire.

While he has tried other terminal sire breeds, McFadzean has come back to the Southdown.

Before 2010 they farmed on Glenbrae Station west of Masterton, the original family farm. Their eldest son Johnnie farms there today, while second son Lachlan works with John on Glenburn and youngest son Corey will be back at Glenbrae in December.

It's a massive and beautiful property with spectacular views of the rugged coastline and the Pacific Ocean. Behind the coastal flats the hills reach skyward into the mists of the steep hill country.

McFadzean says the catalyst for their permanent move to Southdowns was the experience of son Johnnie who saw how good they were while he was shepherding in the South Island.

"He was keen to introduce them at Glenbrae and for B flock ewes and for hogget lambing. So we bought a number of Southdowns for that purpose then to fulfil the needs of hogget lambing and B flock ewes. When Helen and I came to Glenburn we just carried on buying Southdowns.

"We have always had the other breeds to try out and to assess against the Southdown at times, but by and large the Southdowns have proven very successful, producing fast growing prime lambs and particularly successful in lambing hoggets."

At Glenburn, McFadzean has about 30 Southdown rams which he buys from Wairarapa breeder Roddy McKenzie and also some from Jill Beard, near Gladstone, also in Wairarapa.

At Glenbrae, Johnnie McFadzean runs the Southdown rams over the 800 ewes in his B flock and the 1700 ewe hoggets.

The high percentage McFadzean attributes to the quality of his Romney ewe flock, bought from the highly regarded Wairarapa breeders, Holmes and Michael Warren.

The lambs from Southdown rams are generally weaned at the end of the November and some of those lambs will be sold immediately. The remainder will go onto chicory and plantain crops and will go to the works as 18kg-plus lambs in January or February.

"The Southdown breeders have done a great job with improvements over the years. The lambs are long, grow quickly and grade well," McFadzean says.

"The other thing I like about the Southdown is when you compare their lambs with other breeds they may look smaller, but in fact they weigh more. They are very solid well-meated sheep. The breeders have done a great job in making sure the shoulders and heads are reasonably fine and that allows us to use them successfully for hogget lambing."

McFadzean says the Southdown-cross lambs seem well able to handle Wairarapa's dry summers. It's possible to sell the lambs even at lighter weights if need be because they are prime and able to go to the works.

He believes it's important for Southdown breeders to keep a firm eye on the front of their sheep and also their feet, so that the terminal sire rams have longevity.

When to wean lambs?

The ideal weaning date should be guided by whether it achieves two key goals.