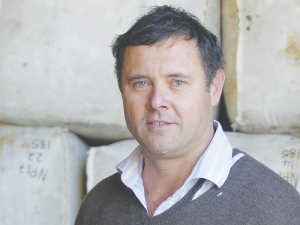 Timaru wool broker Tim Black has been elected as the youngest ever president of the Canterbury A&P Association.

A Timaru wool-broker has been elected the youngest-ever president of the Canterbury A&P Association.

Tim Black, aged 44 this year, says he has been involved with the show all his life.

“I haven’t missed a show yet,” he told Rural News.

It is a real family association, with both his parents also involved. His father Bryce has just retired as its veteran horse-ring marshall, after 70 years with the show.

“We’re going to have wool as the focus of the show this year, which I’m really rapt about,” says Black.

“It’s a great product and if we can showcase it a bit more, if I can do anything for the industry, it’s all good.”

Being “lucky enough” to be the youngest show president, he says he would also like the show to focus on youth.

While conceding that the average age of the people involved in the show has risen over the years, Black has seen “a bit of a swing” towards young people being employed in agriculture.

“For young people who are involved with the A&P at the moment, it’s looking really promising for the future.”

For the third year running, the show will have a live wool auction supported by PGG Wrightson, Carrfields, and NZ Merino.

“A lot of people have never seen a wool auction. It’s sold in a different way,” says Black.

It is fast and exciting.

“You’re actually putting the hammer down after you’ve started the next lot.”

Black is also promising big things for a fashion event introduced to the show last year by North Canterbury’s coloured wool expert Bev Forrester. Black says they intend to “make a spectacle of it” this year with international and local designers represented.

Now running his own firm of Black & Associates, Black has worked in agriculture all his life: he went farming straight from school, then studied at Lincoln, then worked as a stock and station agent before his 15 years as a wool auctioneer.

He is passionate about wool, saying New Zealand is “still a nation of sheep” despite the drop in numbers.

Black says the Merino market is “really good” at the moment, even for second pieces and short wool, which go into the likes of hosiery or fine felting such as for pool tables.

The crossbred market, however, is “struggling.”

“It’s traditionally been carpet wool. Years ago, you were wealthy if you were able to lay a woollen carpet. Nowadays everyone has a carpet, but it’s not made of wool.”

Black notes that only one wool scourer is left in the South Island. Most wool is exported raw and unwashed to Europe or, more commonly now, China.

“This is New Zealand crossbred second shear,” he says, indicating a stack of bales at his Washdyke store. “This is the bulk of New Zealand wool and it’s going straight to China, not even getting scoured in New Zealand. It’s not a good thing; we should be looking after our own. But primarily we don’t have end uses for it. It’s not a valuable product.

“I’ve been in the industry 20 years and it really has been in decline in that time, especially the crossbred. But the Merino’s picked up; it’s going really well.”

Black is experimenting with alternative markets including pillow filling and wool insulation for houses, which he is selling under his own brand. The insulation wool comes back from the scour compressed into bales that are easily peeled apart for installation in slabs of whatever thickness is needed.

Meanwhile, Black believes that one day “the tide will turn” and people will realise wool’s benefits.

Every time a jersey is washed it loses fine fibres, which doesn’t matter with biodegradable wool, but the world’s waterways are filling with plastic, he says.

Brands such as Icebreaker had done really well in selling Merino to the active-wear market.

“It’s a fantastic product. There’s nothing bad about it at all. Buy once, buy well; no-one ever regrets buying quality,” says Black.

Boss woman has earned her stripes