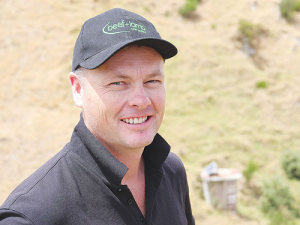 Setting up for next year’s production was the theme of a Beef + Lamb NZ field day held last week at Massey University’s Tuapaka farm just outside Palmerston North.

The event attracted about 50 people including farmers and consultants. They heard about the red meat sector from Murray Jones of Silver Fern Farms and from Massey scientists Steve Morris and Paul Kenyon.

BLNZ’s Jason Griffin says their aim was to provide farmers with information as they gear up for the breeding season.

“It’s getting their rams checked and in the right condition; we call it a ram warrant of fitness,” Griffin told Rural News.

“Also looking at the issue of hogget mating, which means getting them up to the required weight and condition or, if they are not, making a decision not to mate them at all.”

Griffin says the field day showed some of the research work Massey is doing at Tuapaka, such as its work on water quality monitoring, seen by the farmers during a brief tour of the farm.

“I think farmers are pretty positive at the moment,” Griffin said.  “They have had a good spring and summer and it’s only of late that it’s gone dry, but people accept that at this time of the year.

“Prices have been good and so has productivity. Stock are looking good and ewes should go to the ram in good condition.”

Griffin emphasised the need to condition score ewes and gather all necessary information as they head into the new season.

Meanwhile, farm consultant Gary Massicks, who facilitated the day, said it was great for farmers to see the research Massey University is doing for their benefit, especially in water quality.

Although compliance is feared by ome farmers, younger farmers generally don’t see it as an issue as they have grown up in a ‘compliance environment’.

“For the younger generation technology is a way of life,” Massicks said.

He said some farmers are thinking of moving out of sheep because it is too hard to get labour and it is harder for older farmers -- a pity because there is good money in sheep.

“On the other hand, cattle don’t grow dags,” he says.