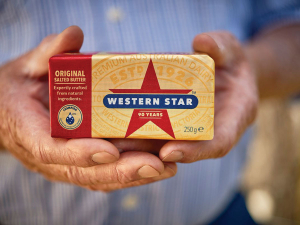 Fonterra's Western Star butter is the number one butter brand in Australia.

However, he believes a buyout by another Australian dairy player looks unlikely due to competition issues.

An ownership review of Fonterra Australia is underway as part of the co-operative’s new strategy to add value to its New Zealand milk.

Fonterra says any option would need to consider the co-op retaining a significant stake in Australia. Options could include partnering with a strategic or financial investor.

The ownership review should be completed by the end of this year but any change to the ownership structure is still 12 months away.

Fonterra claims the Australian business is in a strong position, not only in earnings but also reputation with its customers and importantly its farmers.

However, Spencer says investors will await the IPO documents to see how the Australian business gets carved out of the group results.

“There is not enough visibility to see that completely at this stage,” he told Rural News. “I think there will be investor appetite – depending on the pricing and performance that is laid out in an IPO.

“There are few opportunities for public and institutional investment in the food sector and the growth, depth and diversity of dairy markets is a good story.”

“I’m sure there will be some interest but that will be clarified by the company in its engagement.”

But there will be few options for large players to take out this business without competition issues due to the crossover in product segments.

Spencer says Lactalis could be a potential buyer if the business suits their global business model.

“They don’t have competing opportunities in other markets – Saputo and Bega would be ruled out.”

Australian dairy consultant John Droppert believes farmers will wait and see what comes out of the ownership review.

“I suspect most suppliers will just be curious to see what comes of it and what the ongoing linkage to Fonterra global would be under any proposal,” Droppert told Rural News.

Fonterra is a market leader in Australia in butter and cheese with iconic brands like Western Star, Perfect Italiano and Bega.