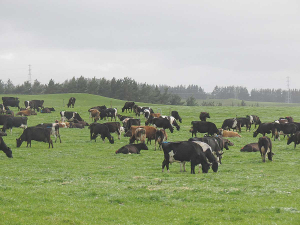 Some have as little as 4% equity in their properties.

These facts are contained in the latest Ministry for Primary Industries situation and outlook report. It warns that with such high debt levels, owners of these farms may not be able to meet the challenges and changes which lie in store for the sector.

The report paints a generally rosy outlook for the sector as a whole. It expects dairy export revenue to rise and a combination of factors likely to lead to high farmgate milk prices and robust profitability for the coming season. However, the report devotes an entire section on the debt issue.

It notes that over the last two decades, conversions and profitability have resulted in a 20% increase in the country’s dairy platform, a 25% increase in the size of the dairy herd and 58% increase in total milksolids production. But this, the report says, has come at a price with dairy farm debt increasing by 267% since 2003 – resulting in total dairy sector debt now standing at $41.4 billion.

In a section headed ‘financial vulnerability in the dairy sector’; the MPI report notes that while the use of debt to fund business and industry growth can play an important role in economic success. But says it appears that with this expansion, the risk level has in the dairy sector has increased significantly.

The report notes, for example, that the average debt per hectare on dairy farms now stands at $23.6k – three times what it was 20 years ago. It also points out that despite low interest rates in recent years, the annual cost of servicing debt from production has risen 11 cents to the present $1.22/kgMS.

It adds that this sets the stage for problems in the future for those farming operations that are heavily indebted to meet the suite of environmental requirements that are already in place or have been signalled by the government.

These include the ability to invest in technology and infrastructure to reduce the sector's impact on freshwater quality and climate change. Consequently, MPI is predicting limited intensification and a reduction in the size of the national milking and herd size.

To add to the woes of some farmers, news that most banks are pulling back from the sector and requiring the active repayment of loans will also have consequences.

The Reserve Bank’s announcement just before Christmas requiring banks to hold more capital is set to put a squeeze on credit to farmers.

Primary sector export returns will take a $1.3 billion hit from COVID-19, but there is some good news.