Wanted: social licence to eradicate and keep out future pests 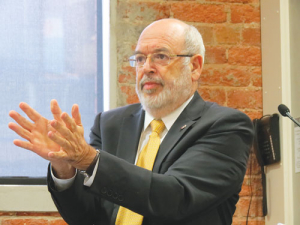 Some form of genetic technologies will in 10, 20 or 30 years be our primary defence against the inevitable biosecurity incursions that will occur.

“We will never be able to stop every incursion. The issue is how “will we get social licence for these new technologies?’ ” he asked the recent Biosecurity 2016 Forum in Auckland,

“That is the big issue for Australia, New Zealand and every society: as these new technologies develop, how will societies decide whether to use them or not?”

He reminded the forum that margarine was only first allowed to be sold in NZ without a prescription in 1972.

By definition we always live in an experimental society, he says. Everything human beings do in social or technological innovation has a degree of risk and unknown.

“There is no such thing as proving absolutely safety; that is scientifically impossible. And therefore different perceptions of relative risk and relative precaution always remain.”

In addition to scientists’ analysis of risk, people also perceive risk at many levels – whether they will benefit, or not benefit.

“Who incurs the risk, who incurs the cost? A whole lot of biases and so forth. There is a third class of risk – political risk, institutional risk and reputational risk. So in risk management all these things come together.”

Better public conversations are needed. Social science and behavioural science need to come into it. For instance how to get people of different cultures to understand the significance of biosecurity to our heritage and economy.

“Is what we do on an aeroplane, i.e. making a rather bland announcement about biosecurity, actually the best way of persuading airline passengers to declare what they have in their bags?

“We need to research how we nudge people of different cultures, backgrounds and heritages to think about it. Biosecurity is ultimately a behavioural phenomenon to some extent.”

Gluckman says our primary industries are a set of large monocultures, be it pine trees, kiwifruit, ryegrass and clover, sheep or cows. The more monocultural your agricultural system, the more at risk it is.

A kiwifruit farmer had asked him what his greatest form of defence was. “Genetic diversity is your best defence against bugs of different kinds,” he says. “It was fortunate and almost an accident that Plant and Food had a number of cultivars present when the Psa epidemic broke out and they found out they had a resistant cultivar which turned out to be of great productivity value.”

Gluckman released a paper in late November on perceptions of risk in science.