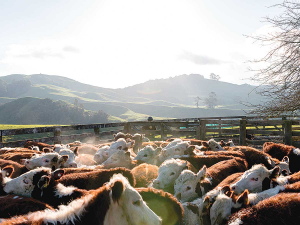 A lifestyle block farmer has been fined $3,500 after he was found to have starved 26 cows.

A Waikato lifestyle block owner has been fined $2,500 for failing to adequately feed 26 cattle and $1,000 for not complying with the requirements of a notice issued by an MPI animal welfare inspector.

Alastair Robert Kane Hughes, 59, appeared in Morrinsville District Court yesterday for sentencing on two animal welfare charges after the case was brought to court by the Ministry for Primary Industries (MPI).

The charges relate to a visit to Hughes’s property, a 4 hectare lifestyle property in Morrinsville, by an animal welfare inspector on 23 July 2020 following a complaint from a member of the public.

At the time of the MPI inspection, Hughes was responsible for 26 cattle.

MPI animal welfare and NAIT compliance regional manager Brendon Mikkelsen says that where MPI identifies that people in charge of animals are failing to meet their legal requirements, they will apply the intervention most appropriate to the circumstances.

“After the inspection Mr Hughes was instructed to provide his cattle sufficient feed to meet their nutritional demands.

“People in charge of animals have an obligation to the welfare of those animals. The animals were Mr Hughes’s primary responsibility and he failed them.”

On 13 August 2020, an animal welfare inspector and veterinarian returned to the property.

After the first visit, Hughes continued to underfeed his cattle, providing them approximately half of their daily feed requirements resulting in the cattle continuing to lose weight.

Four of those cattle required urgent attention to improve their body condition.

Mikkelsen says, “All cases of animal abuse are unacceptable, people in charge of animals have an obligation to the welfare of those animals. The cattle in Mr Hughes’s care were suffering from severe malnutrition.

“In New Zealand, everyone must take responsibility for animal welfare.”

He says that MPI strongly encourages any member of the public who is aware of animal ill-treatment or cruelty to report it to the MPI animal welfare complaints freephone.