US case heats up Roundup debate 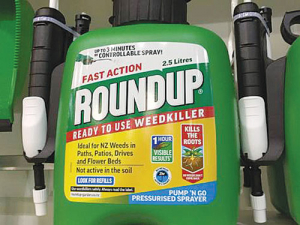 6.1 billion kg of Roundup has been applied globally during the last decade alone.

The great Roundup debacle keeps on with the pro and con lobbies arguing for or against continued use of the herbicide.

Roundup has been sold for at least 40 years, and 6.1 billion kg of the chemical has been applied globally during the last decade alone.

In 2016, the International Agency for Research on Cancer (IARC), part of the World Health Organisation, re-classified glyphosate (the active ingredient) as a possible human carcinogen. This created a furore and demands for its banning.

By contrast, international regulatory authorities have given the product the ‘green light’ for continued supply; these include the EU’s Chemical Agency Committee for Risk assessment, the Australian Pesticides and Veterinary Medicines Authority and the US Environmental Protection Agency.

Locally, the New Zealand Environmental Protection Agency responded to a call by Associate Minister for the Environment Eugenie Sage to have the product listed as a dangerous substance: it pointed her to a study by toxicologist Dr Wayne Temple who said “the product is unlikely to be harmful to humans or genotoxic, i.e. damaging to genetic material or DNA”.

And recently, a San Francisco jury has re-kindled the debate with a judgement ordering Monsanto to pay US$289 million to former groundsman Dewayne Johnson, who claimed that prolonged exposure to the product had caused his incurable non-Hodgkin’s lymphoma. Monsanto is trying to get this judgement overturned on the basis that scientific studies that helped the finding didn’t prove Roundup caused the cancer. The company claims the findings of the jury are at odds with over “40 years of real-world use of glyphosate-based herbicides”.

Business analysts in the US say the size of the award – US$39 million to Johnson to compensate for the cancer he contracted at the age of 42 and a UD$250 million punitive hit on Monsanto – was “so excessive that it shocks the conscience”.